Seven of the ten main sectors moved higher on Monday. The consumer discretionary sector led the way with a gain of 1.14% and it was the only one that managed to gain over one percent.

[hana-code-insert name=’adsense-article’ /]The consumer staples (0.83%) sector and the technology sector (0.77%) were the next best performers.

My scans were relatively even last night with 24 names on the bullish list and 20 on the bearish list.

The balanced scan results caused the barometer to drop slightly, from 25.1 to 21.7.

After three straight days of bullish trade ideas, I have a bearish one for you today.

The stock is Amicus Therapeutics (Nasdaq: FOLD) and has performed poorly from a fundamental perspective. The stock gets a 25 on IBD’s EPS rating and it scores a D in the SMR category. 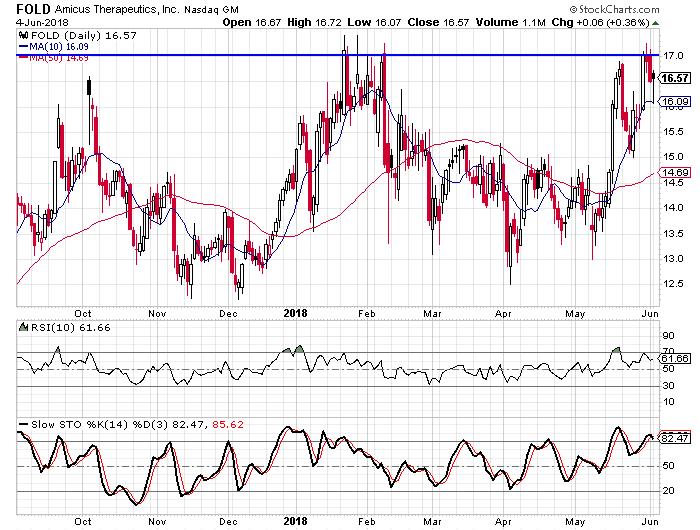 The chart shows that the stock has been trading in a range for the last nine months and the upper end of that range is at $17. After the stock hit $17 back at the end of January and beginning of February, it dropped over 20%. I am looking for another big drop in the coming weeks.

Buy to open the Jul18 $17-strike puts on FOLD at $1.50 or better. These options expire on July 20. In this instance, FOLD would need to drop down to $14 for these options to double and that is exactly what I think will happen. I suggest a target profit of 100% and would set two stops. The first stop is a price stop at $17. The second stop is a time stop. With these being at the money options, the stock needs to move down fast or the time decay will hurt the value. If the stock isn’t below $15.50 in 10 days, I would look to close it.