Friday saw quiet trade ahead of the Memorial Day weekend with two of the indices moving lower and one moving higher. The Nasdaq was the lone gainer among the three with a 0.13% move to the upside. The Dow and the S&P both lost 0.24% on the day.

Seven of the ten main sectors moved lower on Friday with the energy sector getting hit hard with a loss of 2.6%.

[hana-code-insert name=’adsense-article’ /]The materials sector lost 0.54% and no other sector lost more than a half percent.

My barometer posted a reading 0f -22.4 and that is the 11th straight day of negative readings for the barometer.

Despite the bearish overtones from the scans, the one stock that stood out the most was on the bullish list. Network Appliances (Nasdaq: NTAP) caught my attention for the pattern on the daily chart as well as its fundamentals. The stock shows a 70 on the IBD EPS rating system and an A on the SMR rating. 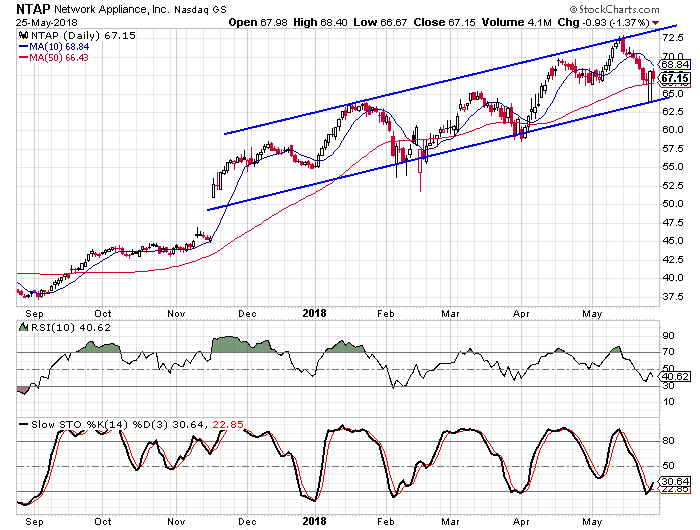 Looking at the daily chart we see that the stock has formed a trend channel over the last six months and the recent dip brought the stock down to the lower rail of the channel. The stock did see a bullish crossover in its stochastics on Friday and the last three times this happened the stock rallied at least 15% in the following weeks.

Buy to open the Jul18 $65-strike calls on NTAP at $3.75 or better. These options expire on July 20. The stock will need to get to $72.50 for these options to double, at least on intrinsic value. That would take the stock up to its recent high, but it will still be below the upper rail of the channel. I would suggest a target of 100% as a gain and would use $65 as the stop-loss point.