All three of the main indices moved lower yesterday, but the losses were pared considerably from the lows of the day. After President Trump announced that the summit with North Korea had been called off, investors showed concern and the selling hit the market. The Nasdaq only lost 0.02% while the S&P lost 0.2% and the Dow lost 0.3%. At the low of the day, the Dow was down more than 200 points.

The sectors were mixed yesterday, but with a bearish skew. Seven of the main sectors moved lower while three moved higher.

[hana-code-insert name=’adsense-article’ /]The utilities sector led the way with a gain of 0.82%.

The energy sector lost 1.68% and that made it the worst performer on the day.

The financial sector lost 0.78% as the second worst performer.

My scans remained bearishly skewed for a 13th straight night.

With the barometer remaining negative and more bearish signals to choose from, I have a bearish trade idea on NCR Corp. (NYSE: NCR) for today’s option trade idea. NCR is below average on its EPS rating (45) and average on its SMR rating with a C. 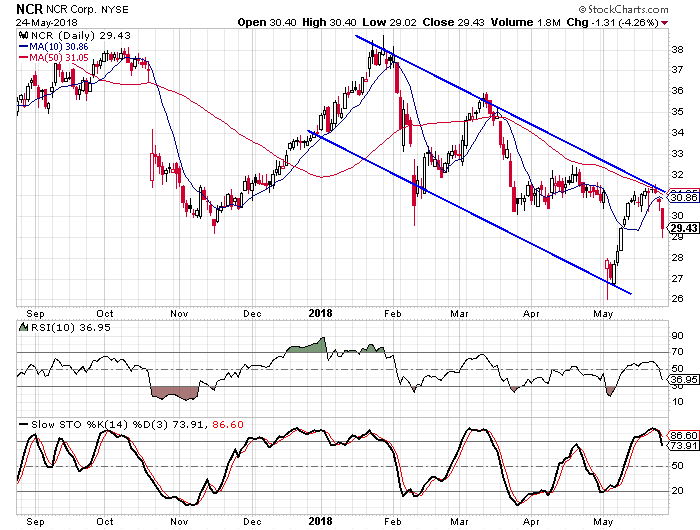