The main indices all three made major turnarounds during yesterday’s trading action. After President Trump tweeted that the trade talks with China weren’t going as well as he would like, futures took a nosedive and stocks opened sharply lower.

However, the indices reversed course and really took off after the Fed Minutes were released at 2:00. The Nasdaq led the way with a gain of 0.64% and it was followed by the S&P with a gain of 0.32%. The Dow lagged the other two indices, but still gained 0.21%.

[hana-code-insert name=’adsense-article’ /]Despite the fact that all three indices closed higher, the sectors were evenly split on the day—five up and five down.

On the plus side, the utilities sector gained 0.91% to lead the way.

The tech sector gained 0.74% as the second leading performer.

On the down side, the financial sector lost 0.64% and was the worst performer.

With the big reversal in the indices, I thought my scans might finally produce more bullish names than bearish names, but they didn’t.

Even though the barometer is still negative, the one stock that stood out the most was on the bullish list. Avis Budget Group (Nasdaq: CAR) jumped out at me due to its chart. The fundamentals aren’t as strong as what I normally look for as the EPS rating is at 65 and SMR rating is a C. 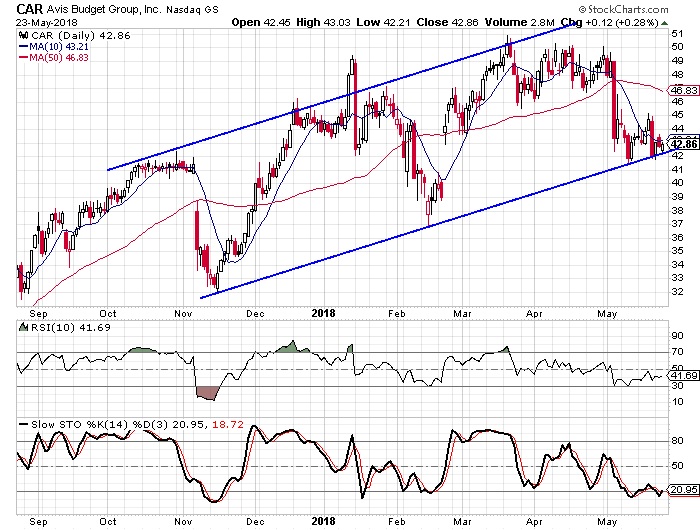 The daily chart for CAR shows how the stock has formed a trend channel and that the stock is hovering just above the lower rail. In addition to that factor, the weekly chart shows that the $41.50 level has acted as resistance in the past. Many times we see former resistance levels turn in to support levels on pullbacks.

Buy to open the Aug18 $42-strike calls on CAR at $4.00 or better. These options expire on August 17. The stock will need to reach $50 for these options to double and that is the point of the recent high so the level could act as resistance. The upper rail of the channel is above that level so that shouldn’t be a factor. I suggest a target of 100% for this trade idea and would use $41 as a stop-loss point.