All three of the main indices closed in the red yesterday, but they didn’t start out that way. In fact, all three started in the green and the Dow moved in to negative territory in the morning while the S&P and Nasdaq didn’t move in to the red until the afternoon. The Dow finished with the worst loss (-0.72%) and it was followed by the S&P (-0.31%).

The Nasdaq was the best performer of the three, but still lost 0.21%. I should also point out that the Russell 2000 lost 0.75% which is notable because it had been outpacing the other indices recently.

[hana-code-insert name=’adsense-article’ /]Eight of the ten sectors moved lower yesterday with the energy sector suffering the biggest loss at 1.33%.

The industrial sector was the only other sector to lose more than one percent with a loss of 1.23%.

On the plus side, the financial sector gained 0.60% to lead the way with utilities sector gaining 0.35% as the only other sector in the green.

My scans extended their streak of bearishly skewed readings to 11 last night.

The barometer dropped deeper in to negative territory with a reading of -29.7.

Of the names on the two list, the one stock that stood out the most was Century Aluminum (Nasdaq: CENX) and it was on the bearish list. From a fundamental perspective, CENX is very average. Its EPS rating from IBD is 50 and its SMR rating is a C. You can’t get more average than that. 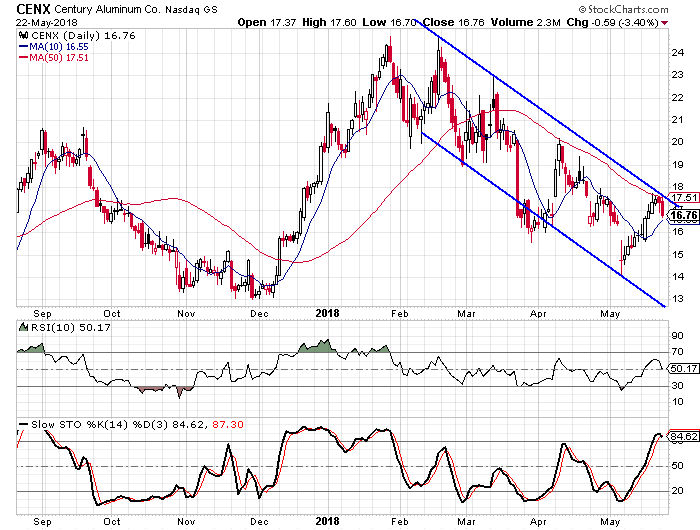 CENX has formed a downward-sloped trend channel and has just hit the upper rail of the channel. That upper rail also aligns with the 50-day moving average which held the stock in check back in April.

Buy to open the July18 $18-strike puts on CENX at $2.20 or better. These options expire on July 20. For these options to double the stock would need to get down to $13.60 and that looks like a realistic target. Target a gain of 100% for this trade idea. If the stock closes above its 50-day moving average, look to shut the trade down.