All three of the main indices moved lower yesterday, but the losses were modest. Once again the Russell 2000 bucked the trend of the main three and gained 0.55% on Thursday. In terms of the big three, the Dow suffered the biggest loss at 0.22% and it was followed closely by the Nasdaq with a 0.21% loss. The S&P’s loss was only 0.9%.

The sectors were split right down the middle with five moving higher and five moving lower. The energy sector led the way with a gain of 1.51%.

[hana-code-insert name=’adsense-article’ /]No other sector gained over 0.5%.

On the down side, the utilities sector lost 0.81% for the worst loss and the telecom sector lost 0.62% as the second worst performer.

The final totals for last night were 12 bullish signals and 33 bearish signals.

This kept the barometer solidly in negative territory at -45.6.

Going through the two lists last night something that jumped out at me was the number of biotech and pharma stocks that were on the bearish list. In all there were nine out of the 33 from those two industries. With that in mind, the trade idea for today is a bearish one on the iShares Nasdaq Biotechnology ETF (Nasdaq: IBB). 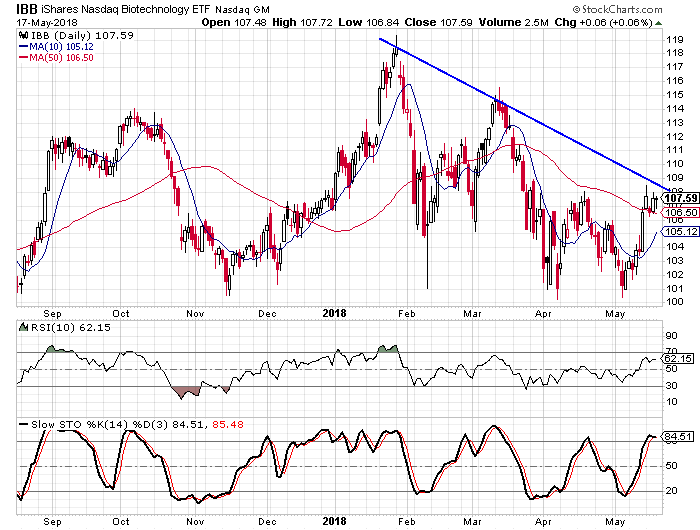 We see on the chart how a trendline connecting the high closes from March and January has formed and is now coming in to play once again. The declines during the January-February period and the March-April period were both over 10% and the one from April to May was just over 6%. I am looking for another decline in the 7% to 10% range.