The market moved modestly higher yesterday with all three of the main indices gaining ground. The Nasdaq led the way with a gain of 0.63% while the S&P gained 0.41%. The Dow lagged the other two, but still managed a gain of 0.25%. The Russell 2000 gained 1.0% on the day and that caught my attention.

[hana-code-insert name=’adsense-article’ /]Nine of the ten main sectors moved higher on the day with the utilities sector losing 0.78% as the only one in the red.

The biggest gainer was the materials sector with a 1.19% move. No other sectors gained over one percent.

My scans were still skewed to the bearish side last night, but the skew wasn’t near as bad as it was on Tuesday night.

There were seven names on the bullish list and 36 and the bearish list. The barometer came in at -59, so still solidly in negative territory for the time being.

In an effort to give some balance to the recent trade ideas, I thought a bullish one might be in order after five out of the last six were bearish. Yum China Holdings (NYSE: YUMC) made the bullish list last night and the company’s fundamentals stood out with an EPS rating of 74 and an SMR rating of an A. 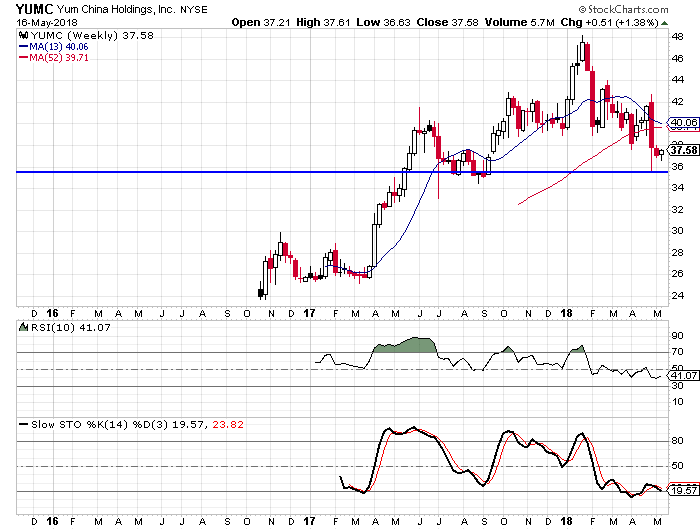 The stock has pulled back over the last four months and the pattern looked similar to the pullback from last summer. The stock seemed to find support in the $35.50 area which is in the same area where it found support last year. After that pullback, the stock rallied back above the $42.50 mark in the following months. I think the stock experiences a similar rally over the next few months.