The market opened lower yesterday and remained there throughout the day. All three of the main indices experienced significant losses with the Nasdaq leading the way down with a 0.81% loss. The Dow lost 0.78% and the S&P lost 0.68%. The indices did rally in the closing minutes to trim the losses, but not enough to change my outlook.

All ten sectors fell yesterday, but only one experienced a loss greater than one percent. The healthcare sector dropped 1.29% as the worst performing sector and it was followed by the tech sector with a loss of 0.94%.

[hana-code-insert name=’adsense-article’ /]The energy sector only lost 0.06% and that was good enough to finish as the best performing sector.

My scans got even more bearishly skewed last night with 108 bearish signals and only two bullish signals.

As I did in February and April, I am recommending a bearish trade idea on the SPDR S&P 500 ETF (NYSE: SPY).

The overall signal from my barometer and the number of stocks that were in overbought territory on their daily charts are the main factors. 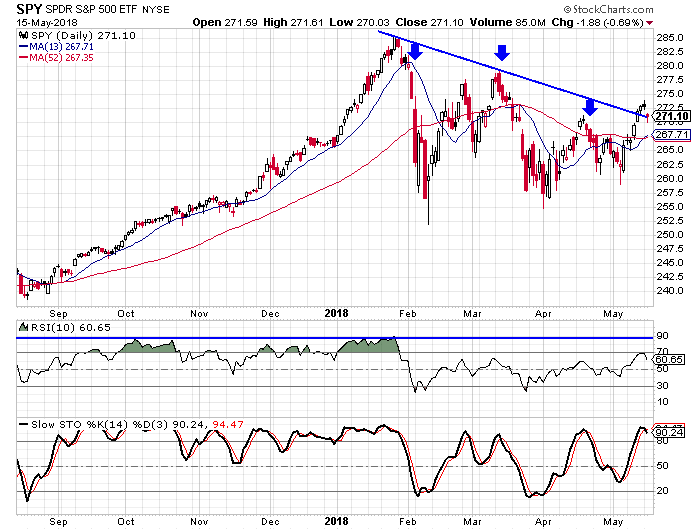 The three blue arrows on the chart above mark the times when my barometer has gone below -60 and when there was a bearish crossover in the stochastics at the same time. The big negative reading from the barometer on March 1 came a few days after the stochastics crossover. We also see how the SPY has created a trendline and it just moved above the line in the last few days before dipping back below it yesterday.

Buy to open the June18 272-strike puts on SPY at $4.75 or better. These options expire on June 15. Based on the suggested entry price the ETF will need to drop to $262.50 for these options to double. That is exactly what I look to happen and would set a target gain of 100%. I would also suggest at stop should the SPY move above $275.