Stocks opened higher yesterday and then moved up during the first half of the trading day. The indices peaked at about 1:00 and then moved sideways for the afternoon. All three indices moved sharply higher, but it was the S&P 500 that led the way with a gain of 0.94%. The Nasdaq gained 0.89% and the Dow gained 0.80% to round out a solid day for all three of the main indices.

All ten sectors moved higher on the day, but it was kind of an odd leader board. Utilities led the way with a gain of 1.41% while the consumer discretionary sector lagged the rest, but still managed a gain of 0.36%.

[hana-code-insert name=’adsense-article’ /]Healthcare, tech and telecom all gained over one percent on the day.

For a third consecutive night my scans produced pretty even numbers on the two sides.

As you can imagine with the nightly lists being even for three straight nights, the barometer has made its way toward neutral.

There weren’t any of the stocks that jumped out at me from last night’s signals, but there was one that I was watching from the night before.

TJX Companies (NYSE: TJX) appeared on the bullish list on Wednesday night, but I opted for the bearish play on JCI instead. After seeing that TJX didn’t jump yesterday, I came back to it. The stock scores an 83 on the EPS rating and an A on the SMR rating from IBD, so it is fundamentally sound. 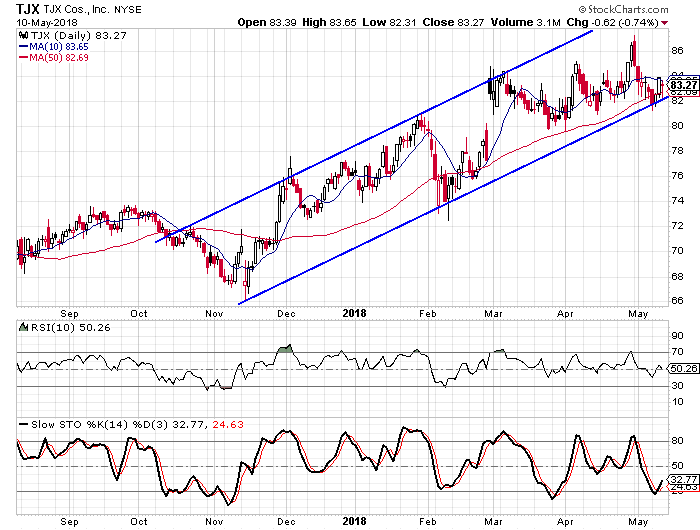 We see how the stock has formed an upward-sloped trend channel that goes back to November. The stock hit the lower rail of the channel earlier this week and it has the added support of its 50-day moving average. I look for the stock to rally in the next few months.

Buy to open the July18 82.50-strike calls on TJX at $3.50 or better. These options expire on July 20. The stock will need to get to $89.50 for these options to double and I think that is a reasonable target for this trade idea. If the stock were to close below the $82 level, I would look to exit the trade to minimize any loss.