The three main indices all experienced solid gains yesterday with the Nasdaq leading the way with an even 1.0% gain. The S&P gained 0.97% and the Dow gained 0.75%. Stocks opened higher and trended higher for most of the day.

There was a small dip at the end of the day that kept the indices from closing at their highs.

[hana-code-insert name=’adsense-article’ /]Eight of the ten sectors moved higher yesterday with five of them gaining over one percent.

Financials, materials, tech and industrials were the other four sectors that gained more than one percent.

The barometer dropped to 9.8 and that is the lowest it has been in five days.

The one chart that jumped out at me was for Johnson Controls International (NYSE: JCI). While it was the chart that caught my eye first, I also noticed that the company has average fundamental ratings from IBD and they have been going down over the last few months. 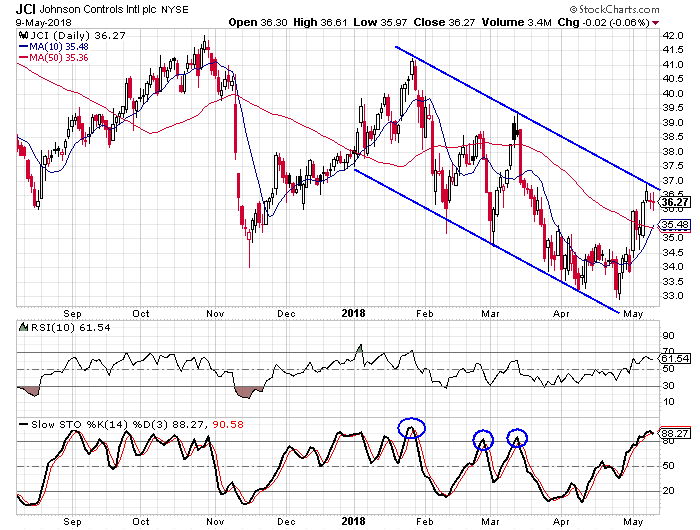 The trend channel that has formed so far this year was so apparent that I could see it before I even drew it. We see that the stock is up near the upper rail at this time. I also circled the last three times the stock has had its stochastics readings make a bearish crossover. Each time the stock dropped pretty abruptly.

Buy to open the July18 37-strike puts on JCI at $1.90 or better. These options expire on July 20. The last three bearish stochastics crossovers have led to a drop of at least 10% for the stock and that is approximately what we need for these options to double. I would set a target of 100% for this trade and would suggest getting out of the trade if the stock moves above $37.