Stocks were never really able to get any footing yesterday. The indices opened lower and made several attempts to climb, but they weren’t able to spend much time in positive territory. They did however rally back from a pretty steep hole.

After President Trump announced the US’s withdrawal from the Iran nuclear deal, stocks were down sharply with the Dow down over 150 points at the lows of the day.

[hana-code-insert name=’adsense-article’ /]The Dow and Nasdaq managed to rally back and close with 0.1% and 0.2% percent gains, respectively.

Opposite of what happened on Monday, six of the ten main sectors moved lower yesterday.

The energy sector was the leading gainer with a 0.8% move to the upside.

My scans were almost even last night as they produced 22 bearish signals and 21 bullish signals.

This is the first time in five days we have had a bearish skew. The barometer dropped from 36.7 to 23.7 as a result of the balanced results.

For the second straight day I have an ETF trade idea for you, only this time it is a bearish play. The iShares MSCI Australia ETF (NYSE: EWA) is a little different from most other country ETFs. Because of the country’s heavy reliance on natural resources, it doesn’t always move in synch with the other world markets. 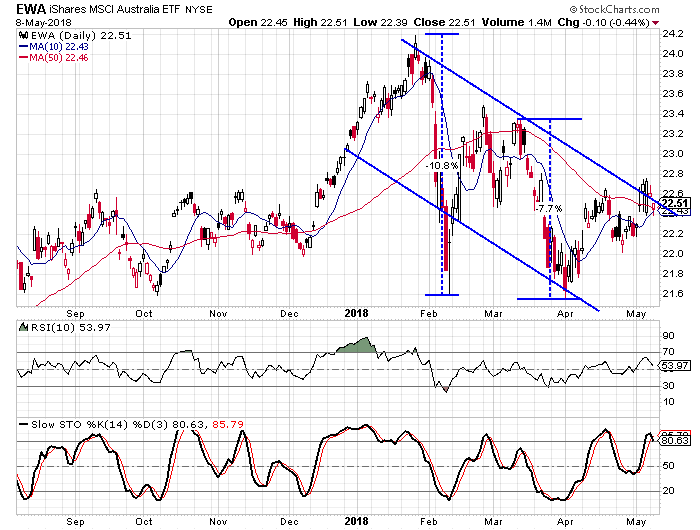 We see that the EWA has been trending lower since February and a trend channel has formed as a result. The fund had moved above the upper rail, but moved back below the rail yesterday. I look for the fund to move lower in the coming months and for the trend to continue.