All three of the main indices moved higher yesterday, but they all closed well off their highs of the day. Stocks were cruising along pretty nicely around 2:30 and were at their highs, but a tweet from the White House about the Iran Nuclear Deal caused stocks to reverse course and all three indices were barely able to hold on to their gains.

Six of the ten main sectors moved higher on the day with the tech sector leading the way with a gain of 0.72%.

That is the second straight day that tech has been the leading performer.

On the down side, the consumer staples sector lost 0.62% as the worst performing sector of the bunch.

My scans produced more bullish names than bearish names once again with the differential being 41 to 16.

This moved my barometer up ever so slightly to 36.7.

The iShares MSCI Emerging Markets ETF (NYSE: EEM) caught my attention last night as it is an ETF that I have traded successfully in the past. 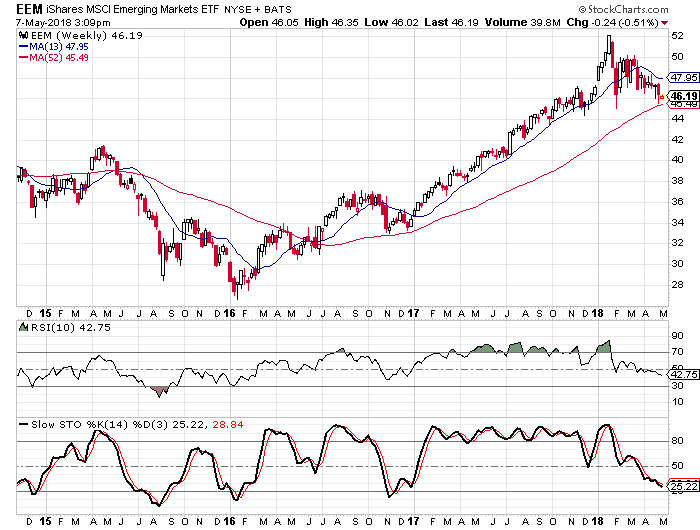 Like most stocks and ETFs, the EEM has pulled back in the last few months, but the EEM was able to remain above its 52-week moving average. Not all funds can make this claim. We see that the last time the EEM came close to its 52-week was all the way back in December 2016. The fund proceeded to rally from under $34 to over $38 in the next few months. I am looking for a similar move this time around.

Buy to open the July18 45-strike calls on EEM at $2.30 or better. These options expire on July 20. The EEM will need to rally up above $49.60 for these options to double, but that is only 7.5% from where the fund closed yesterday. I think the EEM reaches our target easily before the expiration date.