Option Trade of the Day: ON Semiconductor (Nasdaq: ON)

If you just looked at the final numbers for the three indices, you would think that yesterday’s trading action was boring and uneventful. But that wasn’t the case at all. Stocks opened lower and moved even lower in the first few hours of trading. At the lows of the day, the Dow was down almost 400 points.

But stocks rallied and the Dow ended the day in the green with a gain of 0.02%.

[hana-code-insert name=’adsense-article’ /]The S&P (-0.23%) and Nasdaq (-0.18%) closed in negative territory, but they both made major comebacks in the afternoon.

Seven of the ten sectors closed lower on the day with healthcare (-0.90%) and financials (-0.85%) suffering the worst losses.

Materials led the way yesterday with a gain of 0.46% while industrials and tech were also in positive territory.

My scans turned in another bullish skew last night and this time the differential was much greater than it was on Wednesday.

There were 45 names on the bullish list and only 13 on the bearish list. These numbers caused the barometer to flip back to positive territory.

ON Semiconductor (Nasdaq: ON) made it on to the bullish list last night and it is yet another company I have watching for a while, trying to time a bullish play. The company reported earnings on Sunday and the report disappointed investors, causing the stock to slip. Even after the report, the company still gets a 92 EPS rating from IBD and an “A” on the SMR rating. What this suggests to me is that the sentiment toward the stock was too high heading in to the report and has fallen now. 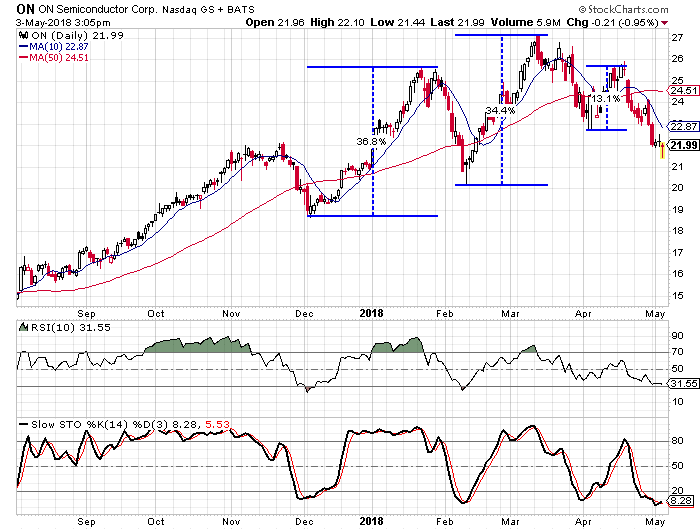 We see the last three times the daily stochastics have made a bullish crossover and we see the gains the stock experienced in the weeks that followed. We had another bullish crossover last night and I am looking for another nice bounce in the next month or two.

Buy to open the July18 21-strike calls on ON at $2.15 or better. These options expire on July 20. We see the returns from the three previous bullish crossovers on the chart above. In this case, we need the stock to rally 15% for these options to double before they expire in July. That would put the stock at $25.30 and give option holders a 100% gain.