Monday started out with gains in all three indices, but the bullish tone turned to a bearish one before we even reached noon. By the end of the day the indices closed at or near their lows of the day. The S&P suffered the worst loss at 0.82%. The Nasdaq lost 0.75% and the Dow lost 0.61%.

The sector performances varied greatly, even though nine of the 10 were down. The energy sector managed to close breakeven. The telecom sector got hit the hardest with a loss of 1.76%.

[hana-code-insert name=’adsense-article’ /]That was mainly due to the reaction to the proposed merger between Sprint and T-Mobile.

Both stocks dropped sharply on Monday and that is unusual for a merger tandem.

We usually see at least one of the stocks move higher and sometimes both of them do.

The streak of having more bullish signals than bearish signals was snapped last night.

After three straight bullish trade ideas, I have another bearish play for you today. CenturyLink (NYSE: CTL) appeared on the bearish list last night and the company is a member of the aforementioned telecom sector. The sector as a whole has been trending lower and for CTL the fundamentals are terrible. The company scores a 16 on the EPS rank from IBD and the SMR grade is a D. 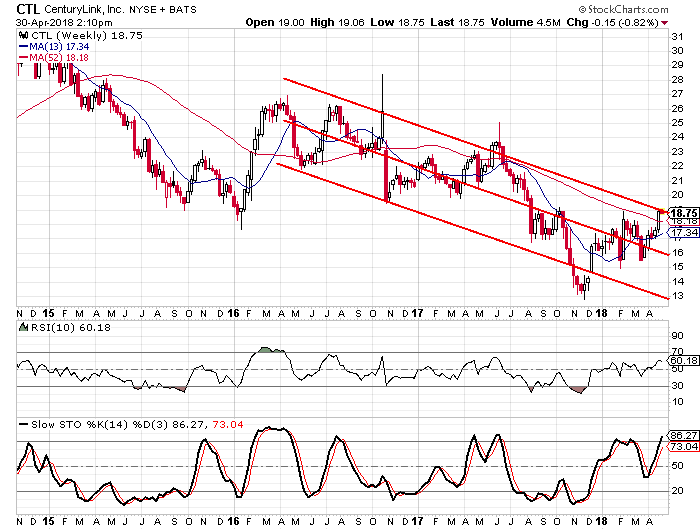 We see the standard deviation channel for CTL and where the stock is currently. It is overbought on the daily chart and close on the weekly while near the top of the channel. That screams of a shorting opportunity. We also see how the stock has had trouble moving above and staying above its 52-week moving average.

Buy to open the Jul18 20-strike puts on CTL at $2.30 or better. These options expire on July 20. For these options to double the stock will need to get down to $15.40 and that is close to the low we hit in March. If the trend remains in place, the low on the next leg down should be lower than the previous low. In other words, if the trend works the way it is supposed to, the options shouldn’t have any trouble getting a 100% gain in the next three months.