Friday saw quite a battle between bulls and bears as it seemed any good news or earnings report was countered by bad news or a poor earnings report. The split led to marginal moves from all three of the main indices. The S&P gained a whopping 0.11% to lead the three while the Nasdaq gained 0.02%.

[hana-code-insert name=’adsense-article’ /]Like the indices, the sectors saw mixed performances on Friday as well.

There were six in the green and four in the red for the day.

On the down side, the energy sector took a 1.06% loss as the worst performer.

Once again my scans produced a pretty solid bullish skew with 49 stocks on the bullish list and only six on the bearish list.

This moved the barometer up to 34.7 and that is the biggest positive reading since April 3.

One name on the bullish list that stood out was Adobe Systems (Nasdaq: ADBE). The stock scores a 97 on the IBD EPS rating and it also gets an “A” in the SMR ranking. Not too many companies score better than that. 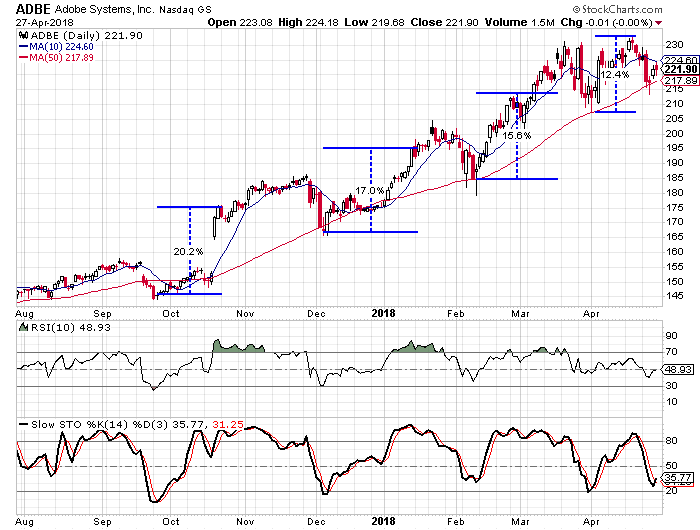 I have marked the last four times the stochastic readings have dipped below the 50 level and then made a bullish crossover. Each time it did this, the stock rallied sharply in the next four to six weeks.

Buy to open the Jun18 220-strike calls on ADBE at $12.00 or better. These options expire on June 15. For these options to double the stock will have to get to $244 and that would be 14.4% move from the recent low. Given the previous bullish crossovers in the stochastics, and the moves that happened within the next month to month and a half, that shouldn’t be too much to ask.