After a week of downward pressure, the market finally got a lift yesterday. The gains were buoyed by great earnings reports from Facebook and Advanced Micro Devices. All three of the main indices moved solidly higher yesterday and it was the Nasdaq leading the way with a gain of 1.64%.

As for the sectors, nine of the 10 moved higher on the day.

The industrial sector was the lone group in the red with a loss of 0.37%.

There were four other sectors that experienced gains of at least one percent: consumer discretionary, energy, healthcare and utilities.

For the second straight night my scans produced more bullish signals than bearish ones and the gap was similar. There were 46 names on the bullish list and seven on the bearish list for a net of 39. The net the night before was 40. My barometer moved back in to positive territory with a reading of 21.5.

The first name that jumped out at me on the bullish list was Estee Lauder (NYSE: EL). I have been watching the company for a number of months and have been looking for an opportunity to go long. The company’s fundamental rankings are really strong with an EPS rating of 89 and an A in the SMR rating from Investor’s Business Daily. 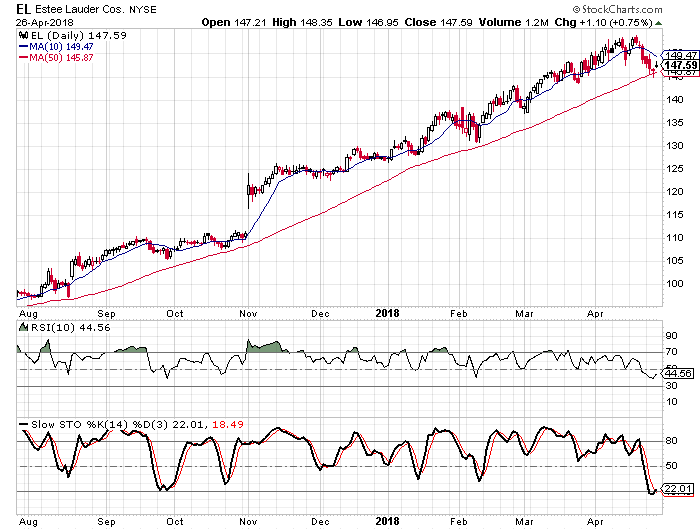 EL has one of the cleanest looking charts I have seen in a long time. Even with all of the volatility we have seen in the last few months, the stock has held up extremely well. The fact that the stock touched its 50-day moving average on Wednesday is newsworthy. It is the first time since last July that the trendline has come in to play.

Buy to open the July18 145-strike calls on EL at $8.50 or better. These options expire on July 20. The stock will need to get to $162 for these options to double, but we also have 86 days until they expire. With the current stock price and the maximum suggested entry price, we need a gain in the stock of approximately 10% in order to get the 100% gain in the options. Given how EL has performed in the past year, that shouldn’t be an issue.