Wednesday was a wishy-washy day for the market. Stocks opened lower, rallied back to breakeven, dipped again and then rallied again. By the end of the day, two of the three main indices closed in the green. The Dow gained 0.25% and the S&P gained 0.18%. The Nasdaq finished with a 0.05% loss.

[hana-code-insert name=’adsense-article’ /]The financial sector lost 0.07% as the only one in the red while the utilities sector finished breakeven.

The energy sector was the biggest winner with a gain of 0.79%.

My scans flipped to a bullish skew last night and that is the first time in eight days that we have had more bullish signals than bearish signals.

My barometer remained in negative territory, but it did jump from -48.8 to -5.6.

There were two prominent groups on the bullish list: consumer staples and semiconductors. There were 10 stocks and ETFs connected to the chip sector, but one in particular stood out for a combination of its fundamentals and technical factors. That stock was Applied Materials (Nasdaq: AMAT). 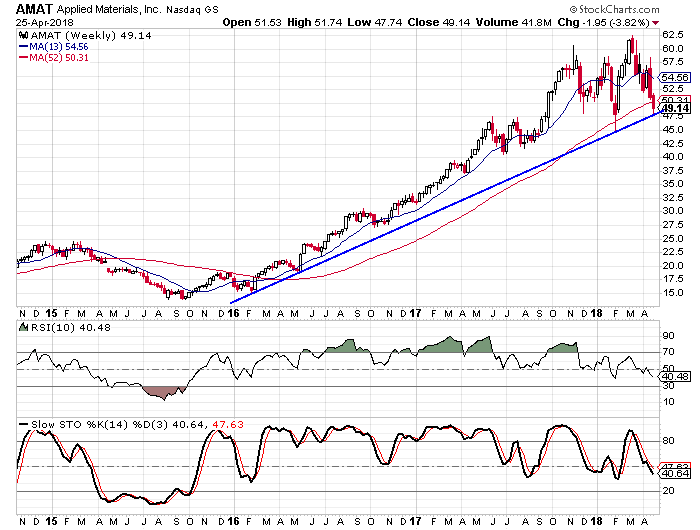 We see on the weekly chart for AMAT how the stock has been trending higher for over two years. The trendline connects the lows from that period. You can also see how this is only the second time in the last two years that the stock has been near its 52-week moving average.

Buy to open the July18 47-strike calls on AMAT at $5.10 or better. These options expire on July 20. Back in February when the stock hit the trendline and rallied, it bounced almost 40% in six weeks. I am not looking for that kind of move this time, but we only need a move of 16.4% to get a 100% gain on this trade.