Stocks pulled a huge reversal yesterday after a couple of major earnings announcements. All three of the major indices opened higher, but all three moved in to negative territory shortly after 10:00. The selling worsened in to the afternoon and the lows were hit around 2:00.

There was a small bounce at the end of the day, but the losses were still sizable. The Dow got hit the hardest with a loss of 1.74% and that was due to Caterpillar. The Nasdaq lost 1.7% and the S&P lost 1.34%.

[hana-code-insert name=’adsense-article’ /]As for the sectors, eight of the ten finished lower with telecom (0.17%) and utilities (0.68%) being the only two that notched gains.

On the downside, industrials got crushed after Caterpillar lowered forecasts.

The sector lost 2.79%. Materials lost 2.65% after Freeport-McMoRan missed on their earnings announcement.

My scans remained skewed toward the bearish side with 29 bearish signals and only eight bullish signals.

The barometer remains solidly in negative territory with a reading of -48.8.

One stock on the bearish list last night was KKR & Co. (NYSE: KKR). The company’s chart caught my eye first, but then I looked at the fundamental ratings and they aligned with the bearish chart view. The EPS rating from IBD comes in at a whopping 5. That’s right, 95% of the publicly traded companies out there have seen greater earnings growth than KKR. 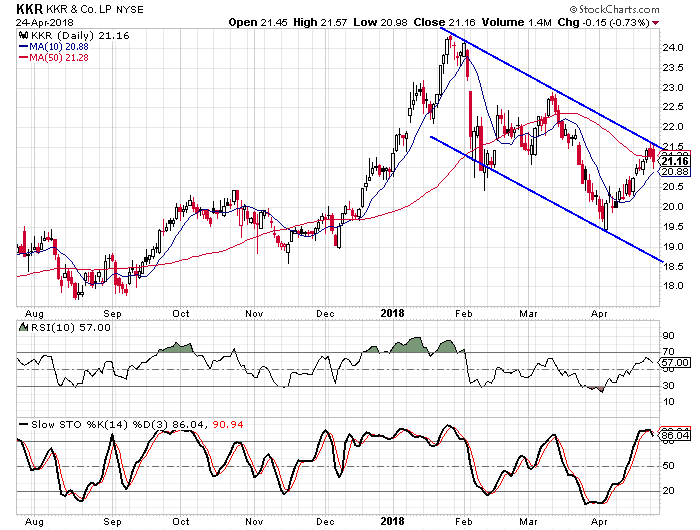 The chart shows how the stock has been in a downtrend for the last three months and the highs connect to form a nice tidy trend line. The stochastics crossover is likely what put it on the bearish scan last night and we see what has happened after the last two bearish crossovers. They have produced drops in the stock of over 15% each time.

Buy to open the June18 22-strike puts on KKR at $1.55 or better. These options expire on June 15. In order for us to reach a 100% gain, the stock will need to break down below the recent low, but I don’t think that should be a problem. The low earlier this month was lower than the low in February and I think we probably see an even lower low this time around. If we were to get a 15% drop from the recent high, it would put the stock down at $18.35 or so and these options would be worth a minimum of $3.65. That would be a gain of 143%.