Stocks came under pressure yesterday after a series of earnings’ reports weren’t up to expectations. All three of the main indices finished lower on the day with the Nasdaq getting hit the hardest with a loss of 0.78% while the S&P lost 0.57%. The Dow held up better than the other two, but still lost 0.34%.

Eight of the ten main sectors closed lower on the day with the consumer staples sector getting slammed with a 2.89% loss.

[hana-code-insert name=’adsense-article’ /]This was due in large part to tobacco stocks getting drilled after a poor earnings report from Philip Morris International- yesterday’s trade idea.

While I was very much right about the stock moving lower, the unfortunate part is that I doubt any of you were able to act on it and benefit from it.

My scans were decidedly more bearish yesterday with 124 signals on the bearish side and only 7 on the bullish side.

The barometer dropped sharply to a reading of 61.3 and that is the lowest reading since March 1.

One stock on the bearish list that got my attention was EQT Corp. (NYSE: EQT).

The company doesn’t have terrible fundamentals, but they are great either. What really got my attention was the continued downward trend while oil and most oil companies have been rallying. 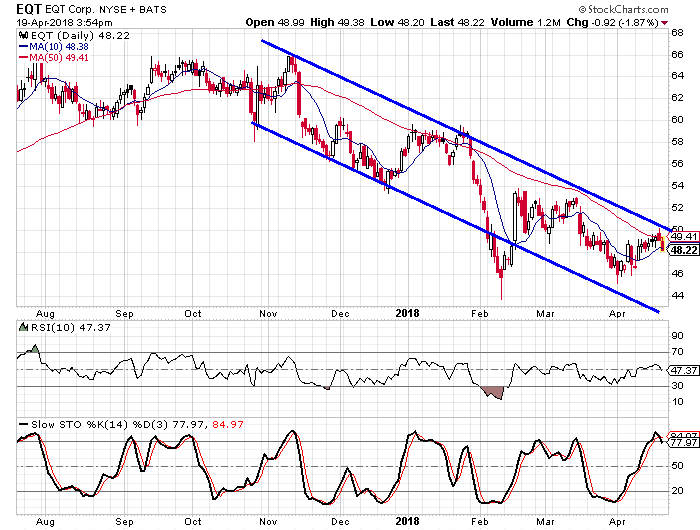 We see the downward-sloped trend channel that has formed over the past six months and we see how the stock is at the upper rail of the channel. I also took note of the bearish crossover by the stochastics and how that has been a pretty good indicator for a downside move during the downward trend.

Buy to open the June18 50- strike puts on EQT at $3.60 or better. These options expire on June 15. The stock will need to get down below the $43 level for them to double in value, but that isn’t even testing the lower rail of the channel. With that in mind, I would set a target gain of 100% for the trade.