Stocks gapped higher on the open yesterday and continued to move higher throughout the day with the highs for the indices coming during the final hour. There was a small dip in the final few minutes of trading, but all three indices finished with solid gains.

[hana-code-insert name=’adsense-article’ /]The Dow was the only one of the three that failed to notch a one percent gain, but it was close with a gain of 0.87%.

Nine of the ten sectors moved higher yesterday with consumer discretionary and tech leading the way with gains of 1.86% each.

In all five of the ten sectors gained over one percent.

The only sector in the red yesterday was the financial sector with a loss of 0.07%.

My scans produced 11 bullish signals and 22 bearish signals last night. The barometer did dip a little deeper in to negative territory at -9.7, but that shouldn’t be anything to worry about.

One name that jumped out at me from the bullish list was YY, Inc. (Nasdaq: YY). I have been tracking YY for some time now because the company’s fundamentals are so strong. They receive a 98 on the EPS rating from IBD and an “A” in the SMR rating. 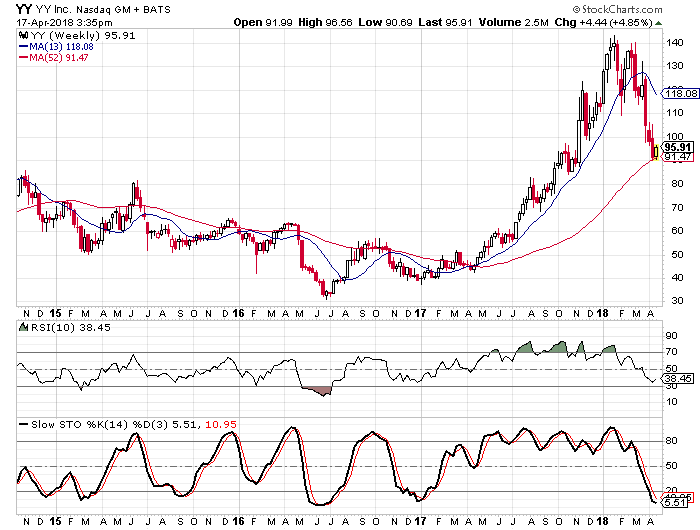 While the fundamentals have had my attention for some time now, the stock was in overbought territory for so long on the weekly charts. I have been waiting for an opportunity to recommend a bullish play on the stock. We see that the last time the stochastics were in oversold territory and made a bullish crossover the stock had a huge run. In fact the stock gained over 250% in just over a year.

Buy to open the August18 90 strike calls on YY at $14.00 or better. These options expire on August 17. The stock will need to get to $118 for these options to double and that would require a gain in the stock of 23% over the next four months. Given some of the short-term gains this stock has had in the past that should not be a problem.