Stocks moved higher yesterday after the trade war talk died down once again and President Trump seem to back off of his threat to use missiles in Syria. So far in April, we haven’t had two down days in a row, but we have had consecutive up days. For yesterday, the S&P was up 0.83% and that was the lowest gain of the three main indices.

Eight of the ten sectors moved higher with the safety sectors of utilities (-1.32%) and consumer staples (-0.15%) being the only two in the red.

[hana-code-insert name=’adsense-article’ /]On the plus side, it was the financial sector that led the way with a gain of 1.75% and that is ahead of earnings reports from Citi, Wells Fargo and JP Morgan Chase that are due out this morning.

My scans produced more bullish signals than bearish ones for the second straight night and that moved the barometer back in to positive territory for the first time in four days.

The final counts from last night were 36 bullish signals and seven bearish signals.

One stock in particular caught my eye because we are seeing the rare event of a bullish crossover on both the daily and the weekly stochastics for Deere & Co. (NYSE: DE). The company has solid fundamental ratings with an 88 EPS rating from IBD and an SMR rating of a “B”. 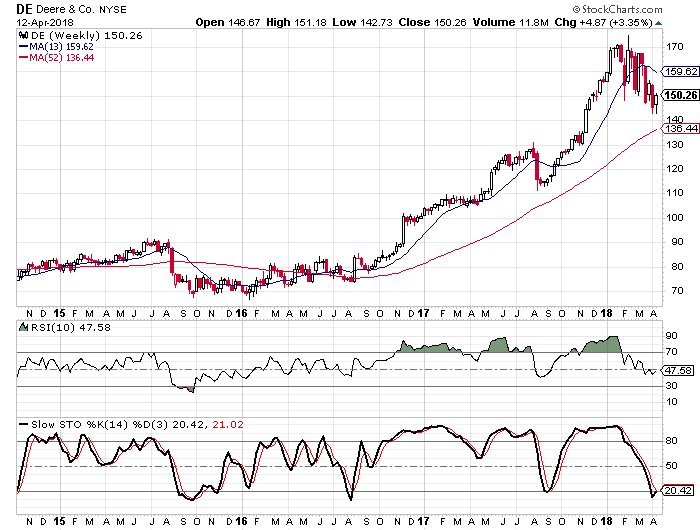 I chose to show the weekly chart rather than the daily chart because I think it does a better job of showing the trend over the last few years. We see the stochastics are down in oversold territory for only the third time in the last two and a half years. Look at the rallies that took place after the stochastics made their bullish crossovers in 2016 and 2017. I am looking for a similar rally this time around.

Buy to open the September18 140-strike calls on DE at $19.00 or better. These options expire on September 21. The last two times the weekly stochastics have been in oversold territory and then made a bullish crossover, the stock has rallied 37% and 49%. I chose the September options because the two previous rallies took in the four to five month time frame and September options expire in just over five months. I think this time around the stock challenges the $200 mark. If it does these options will be worth $60 and investors will be looking at a gain of 216%.