Yesterday was a battle between the bulls and bears. Stocks gapped lower after President Trump tweeted that “missiles will be coming” with regard to the ongoing crisis in Syria. Futures dropped sharply after the tweet and before the opening bell.

[hana-code-insert name=’adsense-article’ /]The index ended up near the lows of the day.

Nine of the ten sectors closed lower on the day with the energy sector (+1.04%) being the only one in positive territory.

Financials got hit the hardest with a loss of 1.19%.

This was an interesting development since the big banks will kick off earnings season on Friday.

My scans were bullishly skewed last night with 37 bullish signals and only one bearish signal.

Not only were the results bullishly skewed, but the quality of the stocks on the bullish list was particularly strong. There were a number of stocks that scored very well on the IBD EPS ratings and SMR ratings.

Of those that scored really well on the fundamentals, Square, Inc. (NYSE: SQ) jumped out at me. The stock scores an 82 on the EPS rating and an “A” on the SMR rating. 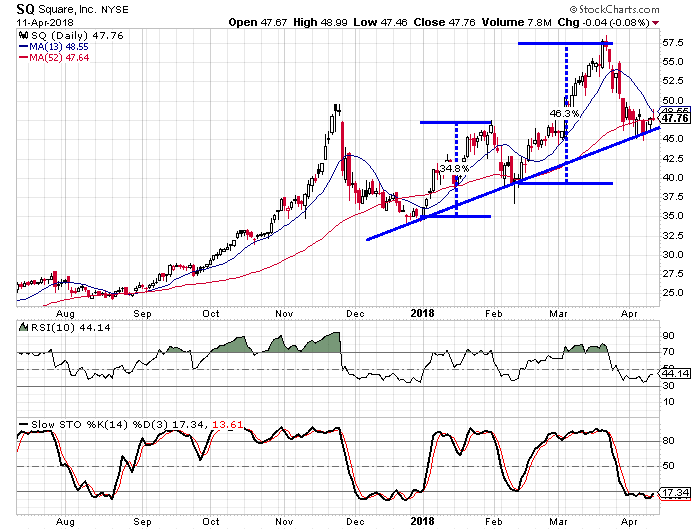 We see on the chart how Square has formed a trendline that connects the lows from January, February and now April. We also see that the stochastics have been in or near oversold territory when all of these lows were hit. In the two previous instances, the stochastics made a bullish crossover and then rallied sharply. I expect the pattern to continue this time around.

Buy to open the June18 47-strike calls on SQ at $5.00 or better. These options expire on June 15. Based on the 35% and 46% gains from the two previous moves, I think the stock can rally up to the $60 area with relative ease and this would make these options worth at least $13 and would mean a 160% gain for investors.