Thanks to Chinese President Xi’s statement that he will look to cut import tariffs, investors breathed a sigh of relief. This allowed stocks to move higher yesterday and we saw big gains across the board for the three indices. The Nasdaq led the way with a gain of 2.07% while the Dow gained 1.79% and the S&P gained 1.67%.

Nine of the ten sectors moved higher yesterday and the only one in the red was the utilities sector (-0.75%). The energy sector led the way yesterday with a gain of 3.32% and the tech sector was second with a gain of 2.46%.

[hana-code-insert name=’adsense-article’ /]The materials sector gained 2.07% and was the third sector that gained over 2.0%.

My scans produced four bullish signals last night and there were 19 bearish signals.

The barometer moved down to -24.2. While the trade war rhetoric may be gone for now, I think the volatility in the market will continue for the foreseeable future.

With so few stocks on the two lists last night, I had to look elsewhere for today’s trade idea.

While the bullish crossover alone isn’t enough for me to recommend a call option, the earnings growth and sales growth for the company in the last quarter helped get my attention. Sales grew by 54% last quarter while the EPS grew by 41%. 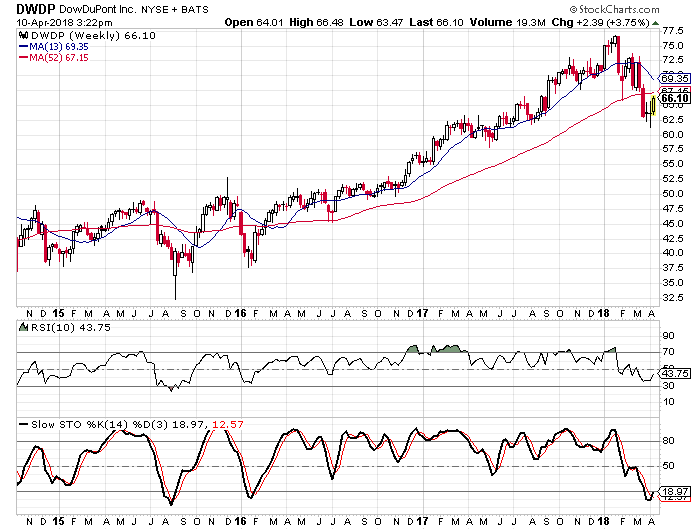 Looking at the chart we see the bullish crossover from the weekly stochastics, but it is what happened after the last few crossovers that caught my eye. Look at how the stock rallied in January ’16 and in August of ’15. Both times the stock gained over 25% the next few months. That is what I am looking for again, a gain of 20-25% in the next few months.