Yesterday was an odd day for the market. Most stocks opened higher and the S&P and Dow were in positive territory for most of the day. The tech sector was struggling early on and that kept the Nasdaq in negative territory.

As the day wore on, the selling in the tech sector was too much and it ended up dragging all three indices down.

All of the sectors except the utilities sector (+1.43%) finished lower and as you might suspect the tech sector was the worst performer with a loss of 3.21%.

Despite the selling, my scans were extremely bullishly skewed.

There were 147 bullish signals and only three bearish signals.

The barometer jumped to 73.1 and that is the highest reading since February 7.

Given the number of bullish signals to choose from, today’s trade idea is a bullish one. Comerica (NYSE: CMA) is one of the highest rated banks in terms of its fundamental rankings and its chart caught my eye as well. I will get to the chart in a minute, but I also wanted to mention that the sentiment toward CMA hit its second lowest reading of the past year on Friday. The lowest sentiment reading came on Sept 9. 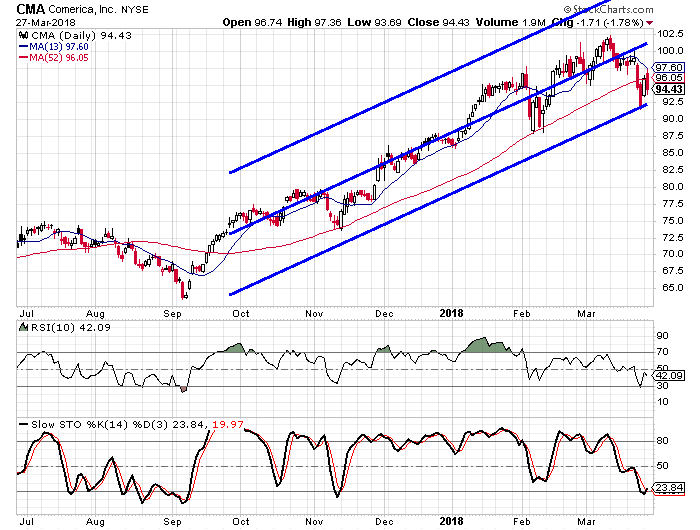 We see the regression channel for the last six months and how the stock is down near the lower rail of that channel. You can also see that the low for the past nine months was in early September and that happened to be the previously mentioned date of September 9.

Buy to open the May18 92.50 strike calls on CMA at $5.70 or better. These options expire on May18. With the sentiment being where it is and the rally the last time the sentiment was so bearish, I am looking for CMA to rally up to the $104 area and that would give us just over a double on this trade. I would set a stop loss at $91 which is just below the low from last Friday.