The market bounced back big time yesterday with the Dow gaining 669 points. The S&P jumped by over 70 points and the Nasdaq gained 228 points. It was the best day in two and a half years for the market. All ten of the main sectors moved higher by at least one percent, but the tech sector was the best performer with a gain of 3.8%.

[hana-code-insert name=’adsense-article’ /]My scans took a decidedly bullish turn after the big jump.

There were 65 bullish signals compared to only six bearish ones. This lifted the barometer to a reading of +21.

After combing through the two lists and looking at the charts as well as the fundamentals, the trade idea I have for you today is a bullish play on Microsoft (Nasdaq: MSFT).

MSFT gets an “A” from IBD’s SMR rating and the stock has been in an uptrend. 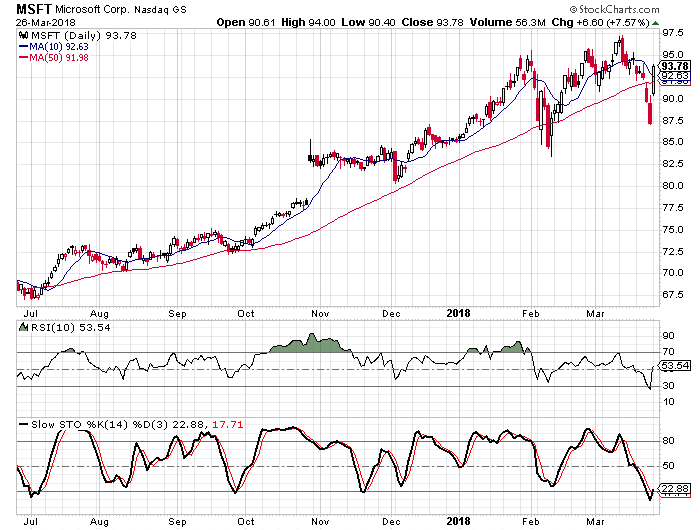 We see that MSFT made a big jump when the market reversed off of the February low and continued to climb few weeks. The stochastics made a bullish crossover in early February and they made one yesterday as well. Even after the big jump on the first day after that February bottom, the stock still gained another 8.7% by the end of February and I am looking for a similar move this time.

Buy to open the May18 90 strike calls on MSFT at $6.50 or better. These options expire on May18. I am looking for a similar bounce to what we saw in early February with the stock jumping between 8.5% and 9% in the next few weeks. That would put the stock up around $102 and would make these options worth $12 on an intrinsic basis.