We saw another big selloff on Friday and the selling accelerated as the day went on. The indices closed near their lows of the day. The sharp selling from the last two sessions has put the S&P and Dow within a few points of their 200-day moving averages.

[hana-code-insert name=’adsense-article’ /]These two indices haven’t closed below that trendline since June 27, 2016.

Many traders watch the 200-day moving average as a longer term support level, so a close below it could be a bearish signal to those traders.

My scans didn’t produce many signals on either side Friday night.

There were only five bullish signals and 10 bearish signals.

The barometer did shift from a small positive number (1.5) to a small negative reading (-2).

Given the increase in volatility and the potential for big shifts, I am suggesting a straddle on Andeavor (NYSE: ANDV) as today’s trade idea. The oil refiner has an EPS rating of 60 and gets a “C” on IBD’s SMR rating system. 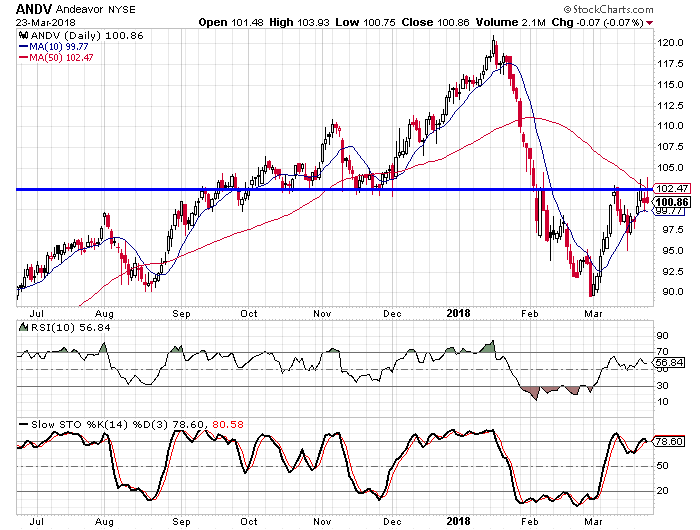 The $102.50 area has been a point of both support and resistance in the past six months. It was support on several occasions in October and November and it acted as resistance earlier this month. I look for the stock to either break down sharply or break out. The overall market is approaching oversold levels and we could see a bounce like we saw in early February. If that happens, I can see ANDV bouncing back up to $115 level rather easily. I also see the possibility that the 50-day moving average acts as a second layer of resistance and drives the stock back down below the $90 level.

The idea of a straddle is that the stock is going to make a big move in one direction or the other. You buy both a put and a call at the same strike price and look for a more modest gain than you would on a straight put or call purchase. In this case the stock is just below the $101 level and that is the strike we will work with in today’s trade idea.