Friday saw stock indices with a slightly mixed performance. The Dow and S&P opened higher and remained in positive territory for the rest of the day, but both saw a pretty sharp drop in the final five minutes of trading.

[hana-code-insert name=’adsense-article’ /]The Nasdaq opened higher, but moved down in midday and waffled back and forth between positive and negative territory all afternoon.

The materials sector was the worst performing group with a decline of 1.31%.

The stretch of bearishly skewed results from my scans came to an end on Friday with 17 bullish signals and only four bearish signals.

The barometer remained in negative territory with a reading of -28.9. Given that there were more bullish signals than bearish ones, it shouldn’t surprise anyone that today’s trade idea is a bullish one. Boeing (NYSE: BA) appeared on the bullish list for the first time in a long time. 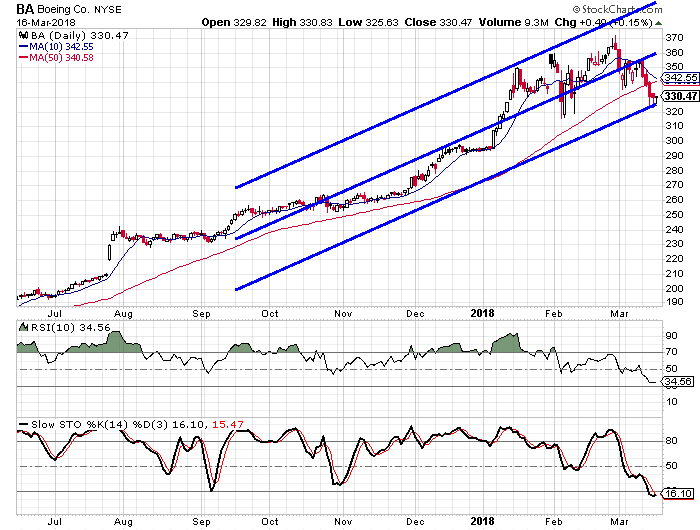 The chart shows how BA is the most oversold it has been in the past nine months. The channel on the chart is a regression channel for the last six months and it shows how the stock is well below the regression line. In addition, the sentiment toward BA hit its lowest reading of the past year last Wednesday.

Buy to open the May18 330 strike calls on BA at $18.00 or better. These options expire on May 18. This option is far more expensive than what I usually suggest in my trade ideas, but I felt it was the best opportunity of the bunch. For these options to double, we will need the stock to move up to $366, but that is only an 11% move, so it isn’t out of the question. The big jump in January moved the stock 18% higher in a very short period of time.