We had another mixed day in the market with the Dow moving up 0.47% while the Nasdaq was down 0.2%. The S&P was down, but only 0.08%. Seven of the ten main sectors were down yesterday with the materials sector dropping 1.32% and it was the only one with a significant decline. The industrial sector was the best performer with a gain of 0.3% and that helped the Dow.

[hana-code-insert name=’adsense-article’ /]For the sixth straight day my scans produced more bearish signals than bullish signals by a count of 34 to four.

Despite the differential, my barometer did move up slightly from -60.4 to –54.4.

Given the bearish skew, I have another bearish trade idea for you today and it is on Crown Castle International (NYSE: CCI).

I have followed CCI for some time and had even played it bullishly back at the end of September.

However, the company ranked in the top 4% of companies for EPS growth back in September and now they rank in the bottom 42% in the same category. 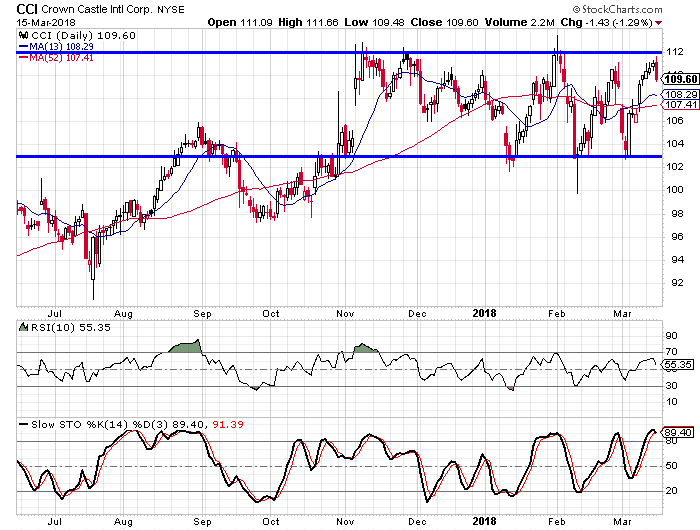 The chart for CCI shows that the stock has been in a range for the last four and a half months with the upper end near $112 and the bottom down near $103. I look for the stock to drop back down to the bottom of the range due to the overbought level on the stochastics as well as a high sentiment reading.

Buy to open the April18 110 strike puts on CCI at $2.75 or better. These options expire on April 20. These options are slightly in the money and they only have 36 days until expiration. With that in mind, this is a relatively aggressive trade and should be treated accordingly. I would set a stop-loss at $112. I would also consider adjusting the stop to account for the time left. If the stock starts dropping immediately, you can move the stop down a little. I also would suggest not keeping the options open past April 6 as the time decay will increase dramatically in the final two weeks before expiration.