Wednesday was another interesting day for the market after the humdrum day on Tuesday. The indices opened lower after President Trump tweeted about possible tariffs on all Chinese products and the S&P dipped approximately one percent right around Noon.

[hana-code-insert name=’adsense-article’ /]The index hovered near the lows for about an hour and then started rallying and eventually moved in to positive territory in the last half hour before closing with a very small loss.

The downward pressure in the early going seemed to be enough to generate a few more bearish signals than we have seen from the scans lately, but the bullish signals still outnumbered the bearish ones.

The final tally was 35 to 23. Despite the slightly bullish skew, today’s trade idea is a bearish one and it is a stock we have played before.

The trade idea back on January 26 was a bearish play on Philip Morris International (NYSE: PM) and that one worked out really well. In that trade idea I cited poor fundamentals and rather bullish sentiment as the main reasons as well as the pattern on the chart. 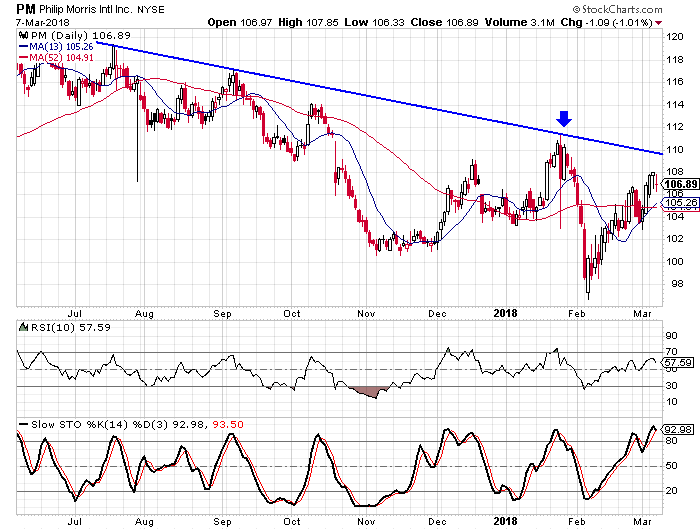 I extended the trendline from that previous article out to yesterday and that is what you see above. Once again we see the daily stochastics in overbought territory and making a bearish crossover and the sentiment is again in the upper range of the past year’s readings. I pointed out in the previous article that the sentiment was at bullish extremes prior to the decline in October and in July. Given the success of the first bearish play and the similar setup this time gives me great confidence in this trade.

Buy to open the Apr18 110 strike puts on PM at $5.50 or better. These options will expire on April 20. After three straight bullish trade ideas, I felt like we needed a little more bearish exposure ahead of the release of the employment report on Friday. Given the current price of the stock, we only need a drop of 7.4% for these options to double. The drops in January and October were both well over 11%, so it doesn’t seem to be too much to ask for a 7.4% drop.