We saw another big move down yesterday in equities and this caused many stocks to move back below their 50-day moving averages after moving slightly above them in the past week. My scans were decidedly bearish with only two bullish signals and 178 bearish signals for a net of -176. That is the biggest negative single-day reading since March ’16.

Adding these numbers to the barometer caused the overall reading to drop to -65.3 and that is the second lowest reading of the past year. The lowest reading came on January 25, just before the big correction.

The two sectors that seemed to be represented the most in the bearish scan were technology and energy.

The trade idea I have for you today is a bearish play on one of those tech stocks, Jabil Circuit (NYSE: JBL). JBL doesn’t have terribly fundamentals, but they aren’t great either. And the sentiment toward the stock just had one of hits five highest readings of the past year. 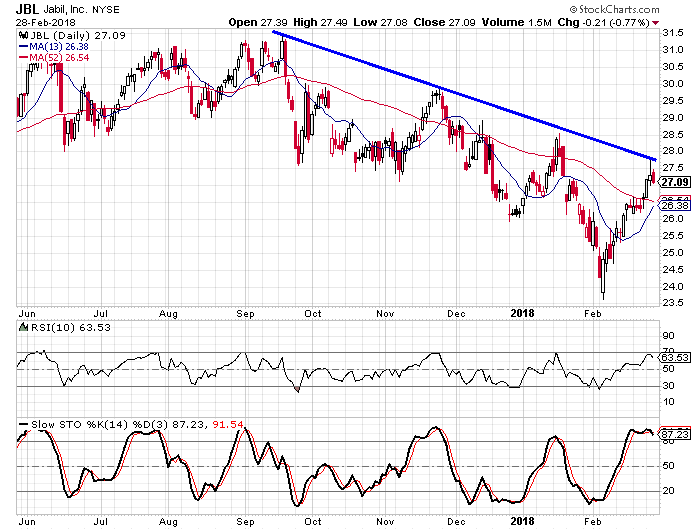 Looking at the chart we see that the stock has formed a downward-sloped trendline that connects the highs from the past five months. The stock hit the trendline on Tuesday and moved lower yesterday. We also see that the daily stochastic readings made a bearish crossover. If you look at the January high in the stock, that came on January 18 and we saw a bearish crossover in the stochastic readings then as well and that is also the last time the sentiment was more bullish than it was on Tuesday.

Buy to open the April18 28 strike puts on JBL at $2.00 or better. These options expire on April 20. Given the similarities to what the chart and sentiment look like compared to January, I am looking for the stock to make a similar move to the downside. That move saw the stock drop by 17% in just under three weeks. A 17% decline from Tuesday’s high would put JBL down near the $23 level and would make these options worth at least $4.90 which would mean a gain of 145% in the next two to three weeks.