After three straight days of gains and big rallies on Friday and Monday, stocks came under pressure yesterday. The S&P opened slightly higher and then closed well below the low from Monday, creating a bearish-engulfing pattern.

One odd thing about the bearish list was that several of the stocks are reporting earnings in the next few days.

One of the stocks set to report that came up on the bearish list was Kohl’s (NYSE: KSS).

On top of that, the sentiment toward the stock is close to a bullish extreme level. 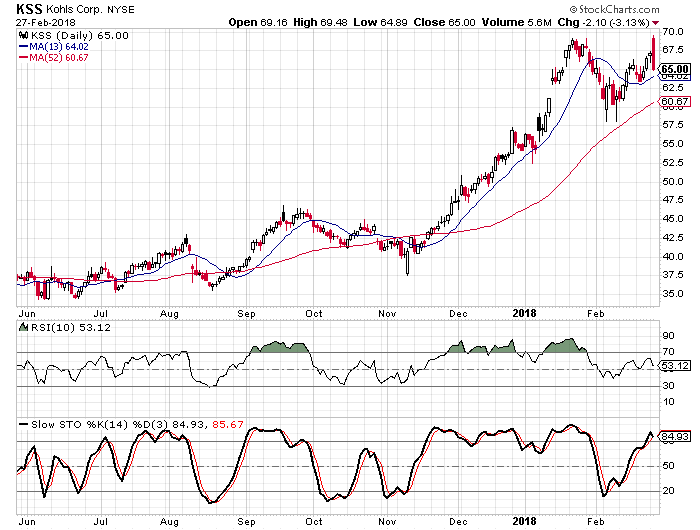 Like the S&P, KSS formed a bearish-engulfing pattern yesterday. This pattern also comes just below the $70 level which acted as resistance in April ’15. The weekly oscillators are in overbought territory as are the daily stochastic readings. The 10-day RSI is one of the few indicators that isn’t in overbought territory. Analysts expect the company to report earnings per share of $1.77 on Thursday, but with sentiment as bullish as it is, the company will likely need to beat that number handily for the stock to rise.

Buy to open the April18 67.50 strike puts on KSS at $6.20 or better. These options expire on April 20. While the March options were cheaper, I am not looking for the stock to drop straight down to the $55 level on the earnings report, but rather over the course of the coming weeks. In December of ’16, the stock started falling on the earnings report and ended up dropping over 27% in four weeks and that is more what I see happening here.

I would make one suggestion with regard to this trade idea and that is to reduce your allocation because of the risk level. If you normally put $2,000 in to a trade idea, cut in half and put $1,000 in to this one. This is only an example and should not be construed as advice on how much to put in to the trade. I am just suggesting that you should cut your exposure to this one trade.