The change in the market environment caused a change in my scans on Friday night and we ended up with 40 bullish signals and only four bearish signals.

[hana-code-insert name=’adsense-article’ /]That was the first time the bullish signals exceeded bearish signals in five days.

Given the number of bullish signals compared to bearish signals you would be correct to assume that today’s trade idea is a bullish one.

It is a bullish play on Halliburton (NYSE: HAL).

The company has some of the strongest fundamentals of any of the energy stocks and that got my attention just as much as the chart did. 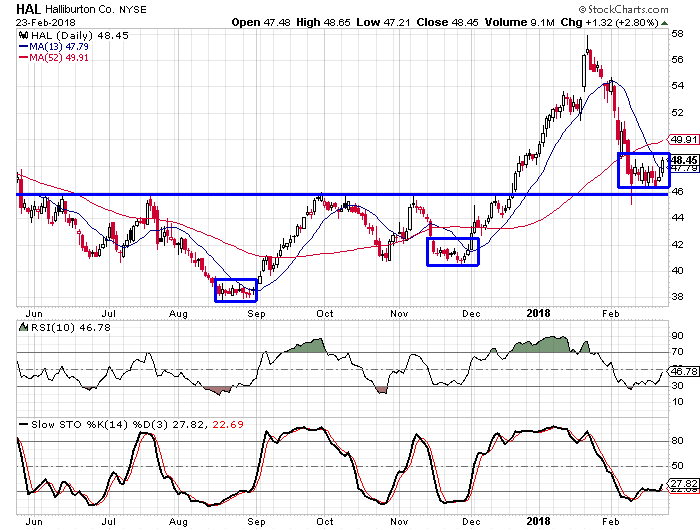 On the chart we see that the stock just dropped from a multiyear high and then consolidated just above a former resistance level at $46. We see two other consolidation periods similar to the one we just went through and both of the previous times saw the stock rally sharply for a month or two. I expect a similar outcome this time around.

Buy to open the April18 45 strike calls on HAL at $4.30 or better. These options expire on April 20. Given that these options have 55 days until they expire and given the price, I expect this trade idea to do very well. It would take a move to $53.60 for these options to double and I can see that happening rather easily. If they do double in the next three to four weeks, I would look to sell half of the position and then hang on to the second half to see if the stock continues up to the recent high up near $58. If the stock gets up to $58, these options would be worth $13 and that would be a 200% gain on the second half. If you sell half at 100% and half for a 200% gain, that gives you a 150% gain overall. I would also set a stop loss at $45.50.