Last night’s scans produced an astounding 220 bullish signals and not a single bearish signal, except for inverse ETFs which actually count on the bullish side of the equation. When I added these numbers to my barometer I got a reading of 122.2 and that is the third highest reading I have ever gotten since I started tracking this indicator on January 1, 2009.

Both of those signals were pretty strong signals both in the short term and in the intermediate term.

While these are encouraging signs for the market, I wouldn’t run out and sell all of my bearish plays immediately.

The volatility continued yesterday with the main indices making wild swings most of the day. There was over a 500-point swing on the Dow and almost a 50-point swing on the S&P. Even with that in mind, I am making a call the option trade idea for today.

The iShares Emerging Markets ETF (NYSE: EEM) is another trade I have recommended several times over the past year with great success. When the markets are vacillating greatly, it is usually a good thing to return to a stock or ETF that you have traded successfully in the past. 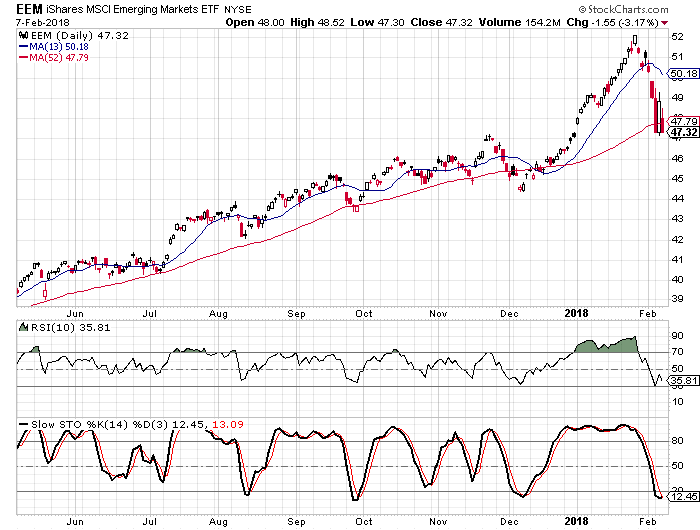 The EEM hit an oversold level similar to the one we saw back in late September and in early December, at least based on the stochastic readings. In both of those cases, the EEM rallied both over the short term and even over a little longer term. The sentiment toward the EEM hit is most bearish level of the past two years on Monday and past instances of bearish sentiment have been good signs for the EEM.

Buy to open the April18 46 strike calls on EEM at $3.00 or better. These options expire on April 20. Based on the EEM closing at $47.33 yesterday and the price of these options being just under $3.00, we would need a gain of approximately 10% in the next few months in order for the options to double and that seems realistic based on previous oversold readings and bearish sentiment readings.