Friday got downright ugly for stocks and that caused last week to be the worst week for the S&P since the first week of 2016 with the index losing 3.85%. The causes for the selloff are numerous- lackluster earnings reports from Apple and Alphabet, the jobs report being too good which raised inflation fears, etc.

[hana-code-insert name=’adsense-article’ /]Or it could have just been a reaction to the overbought levels and overly optimistic sentiment readings that have been generated from one of the longest bullish periods in history.

I have mentioned my daily scans quite a bit and I have alluded to my weekly scans a time or two in this space, but the weekly scans from last week were noteworthy.

In all the years I have been running those scans, I don’t remember a more lopsided week toward the bearish side. 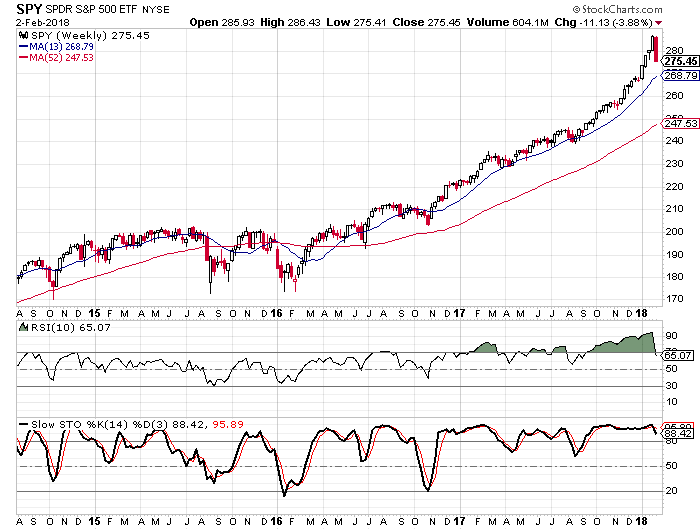 We see on the weekly chart how the ETF dropped last week and how overbought it was heading in to the week. We also see how when the RSI and stochastic readings were overbought and turned lower, more times than not, the SPY dropped down to its 13-week moving average at the very least. A drop down to the 13-week would mean dropping down to around 270 or lower. Should the SPY drop down to its 52-week, we would be looking at the 250 level.

Buy to open the March18 279 strike puts on SPY at $7.50 or better. These options expire on March 16. I normally try to target a gain of at least 100% on my option trade ideas, but this idea is a little different. This one should be considered insurance for a continuation of the selling we saw last week. If the Spyders find support at the 13-week moving average, that would be a gain of approximately 50%. If it falls all the way down to the 52-week moving average between now and March 16, these options could be worth as much as $19.00, depending upon how abrupt of a drop it might be. If you have a portfolio filled with tech and biotech stocks, you might want to consider a similar trade on the QQQ.