The bank holding company, Washington Federal Inc. (NASDAQ: WAFD) shows signs of an upcoming price surge after a pullback according to its latest charts.

Following are some of the bullish indications on its charts.

#1 IH&S Breakout in Daily chart: As you can see from the daily chart of WAFD below, the stock has broken out of an Inverted Head and Shoulders (IH&S) pattern.

An IH&S pattern is a strong bullish pattern and indicates that the stock may move higher in the short term.

Typically, there would be a pullback to the breakout level of IH&S before the stock would resume its upmove.

This seems to be happening currently.

The RSI is near overbought levels, further supporting the possibility of a price correction until the neckline of the IH&S pattern breakout. The middle-band of the Bollinger band is also near the neckline breakout, indicating a good support at this level. 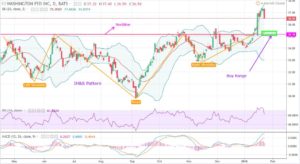 #2 MACD above signal line: As you can see from the daily chart, the MACD line is currently above the signal line, indicating a bullish bias.

#3 Flag pattern breakout: The stock was in an uptrend until the week ending December 12, 2016. After that, the stock was in a consolidation phase that lasted for nearly one year. This consolidation is marked as a green rectangle in the weekly chart. This indicates a classic flag pattern. WAFD broke out of the flag pattern on the week ending January 15, 2018, and continued its uptrend. The stock is expected to correct to the breakout level once again before continuing its upmove. 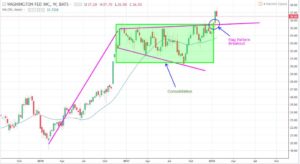 #4 Above 30 SMA: The weekly chart of WAFD shows that the stock is currently trading above its 30-week SMA, which is marked in blue color. This indicates overall bullishness of the stock. The stock is also currently in an uptrend as it has been making higher highs and higher lows for the past 2 years.

Buy Price: If you want to get in on this trade, you can purchase shares of WAFD when the stock pulls back to the neckline of the IH&S pattern breakout in the daily chart. This is in the range of $35 and $35.60.

SL: To limit risk, place a stop loss at the low of the shoulder of the IH&S pattern. This translates to $32.10. Note that the stop loss is on a closing basis.

In other words, this trade offers nearly 2x to 5x more potential upside than downside.

Risks to Consider
The stock may reverse its overall trend if it breaks down with high volume from the neckline of the Inverted Head and Shoulders pattern in the daily chart and flag pattern in the weekly chart. The sell-off of the stock could also be triggered in case of any negative news, overall weakness in the market, or any regulatory changes in the sector.