Gold has rallied sharply over the last month and that has caused the sentiment toward the metal and the ETFs that represent the metal to reach extremely bullish levels. The Commitment of Traders report is released by Commodity Futures Trading Commission every Friday and it shows the net positions of three different categories of investors: large speculators, small speculators and commercial hedgers.

[hana-code-insert name=’adsense-article’ /]I personally pay the most attention to the large speculators as they have the money and influence to have the greatest impact on the market.

We saw a similar jump from July to September.

If we look at the chart we see that the SPDR Gold Shares rallied sharply as the sentiment was shifting.

We see also that the ETF became extremely overbought on the 10-day RSI and the stochastic readings. It was when the RSI dropped below the overbought level that the decline in the GLD accelerated. 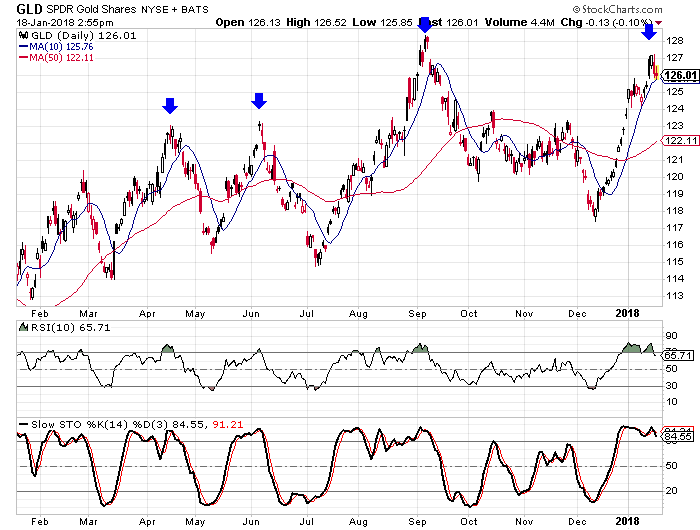 You see there are four blue arrows on the chart as well. These represent times when the sentiment toward the GLD was similar, including the recent high reading on January 12. We see that each time the sentiment was this high and the ETF was overbought, the GLD declined noticeably in the following month. I am looking for the pattern to repeat itself.

Buy to open the March18 129 strike puts on GLD at $4.00 or better. These options will expire on March 16. The three declines marked on the chart above averaged 6.6%. A similar decline this time around would take the stock just below the $119 level and would make these options worth at least $10.00 based on the intrinsic value. This would represent a gain of 150% if everything works out perfectly. I would look to shut the trade down if ETF moves up above $127.25.