Electric utility and banking businesses company Hawaiian Electric Industries, Inc. (NYSE: HE) seems to be gearing up for a surge after a slight pullback as per its latest charts.

[hana-code-insert name=’adsense-article’ /]There are quite a few bullish indicators in Hawaiian Electric Industries’ charts.

The stock is also currently trading above its 200-day SMA, which implies that the bulls are still in control.

#2 Double Bottom Pattern Breakout: The daily chart of HE shows that the stock had recently broken out of a Double Bottom pattern. This is marked in the chart below. This is a possible sign of an upcoming bullish move. 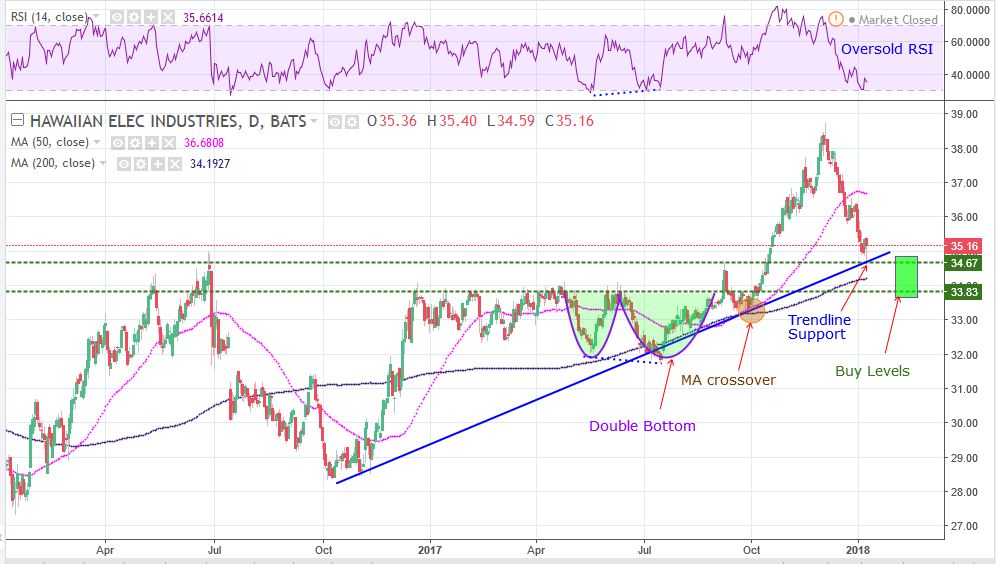 #3 Many Support: The stock is currently trading near many support levels. The trendline support (blue line) is quite nearby. The neckline of the double bottom pattern breakout (the second green dotted line at $33.83) also acts as a major support level. As you can see from the daily chart, the stock had attempted to cross that price level multiple times earlier before finally succeeding during the double bottom pattern breakout. The 200-day SMA is also close by and acts as a strong support for the stock.

#4 Oversold RSI: In the daily chart, the RSI is near 30, indicating that it is oversold. This implies that a possible reversal is around the corner. 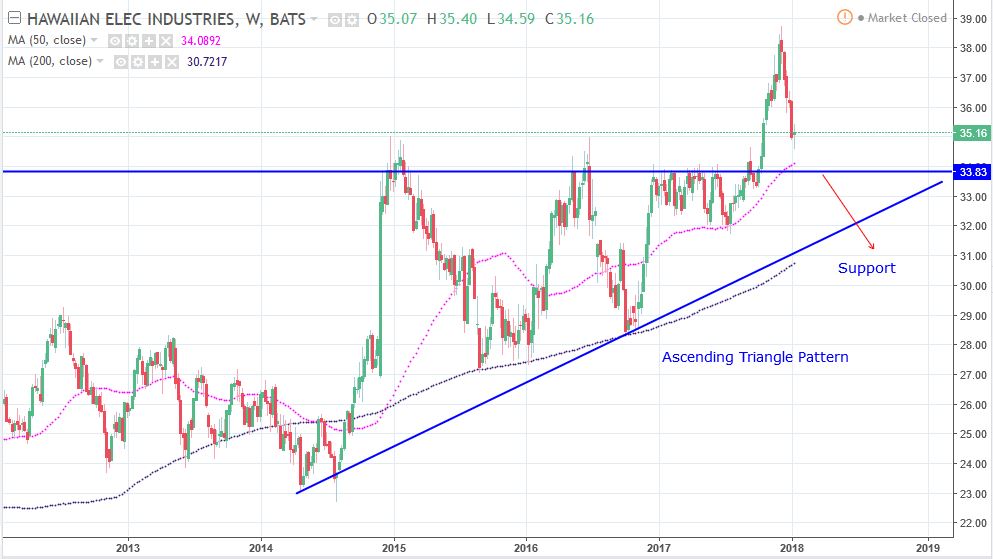 Buy Levels: If you want to get in on this trade, the buy levels of HE is when it pulls back and reaches between the ranges of $33.83 to $34.67. This is marked in the daily chart as a green rectangle.

TP: Our target price is based on the breakout from Ascending Triangle pattern. This translates to around $43.

SL: To limit risk, place a stop loss below the previous low of the weekly chart, at $33.20. Note that this stop loss is on a closing basis.

In other words, this trade offers nearly 6X to 15X more potential upside than downside.

Risks to Consider
The stock may reverse its overall trend if it breaks down with high volume from the double bottom pattern and ascending triangle breakout level. The sell-off of the stock could also be triggered in case of any negative news, overall weakness in the market, or any regulatory changes in its sector.