The latest charts of BBSI shows quite a few positive signs that point to a near-term upmove after slight correction.

Bullish Indications
#1 Above 200 SMA: As you can see from the daily chart of BBSI below, the stock has been on an uptrend, as it has been making higher highs and lower lows. The stock is currently trading above its 200-day SMA. This indicates that the stock’s uptrend is still intact.

This cross of a shorter term MA above longer-term MA is called as a bullish crossover and indicates a possible bullish bias for the stock.

The lower gap support of $60 was previously a major resistance level which was tested unsuccessfully multiple times during the year before finally breaking out. This resistance-turned-support level is now a major support for the stock and would be a very good entry point for trading the stock. 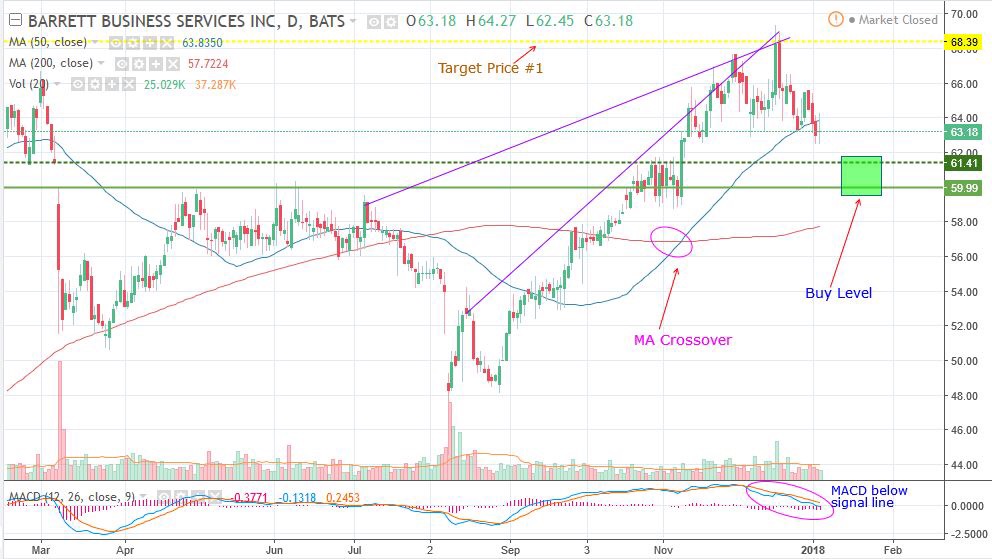 #4 Double Bottom Pattern: The weekly chart of BBSI formed a double bottom pattern on the week ending August 21, 2017. There was also a positive MACD-Price divergence at the same time. Then it broke out of the double bottom on October 30, 2017. It then went upwards for a few weeks and is now correcting back to the breakout level. An ideal buy would be when it retests the breakout level again. 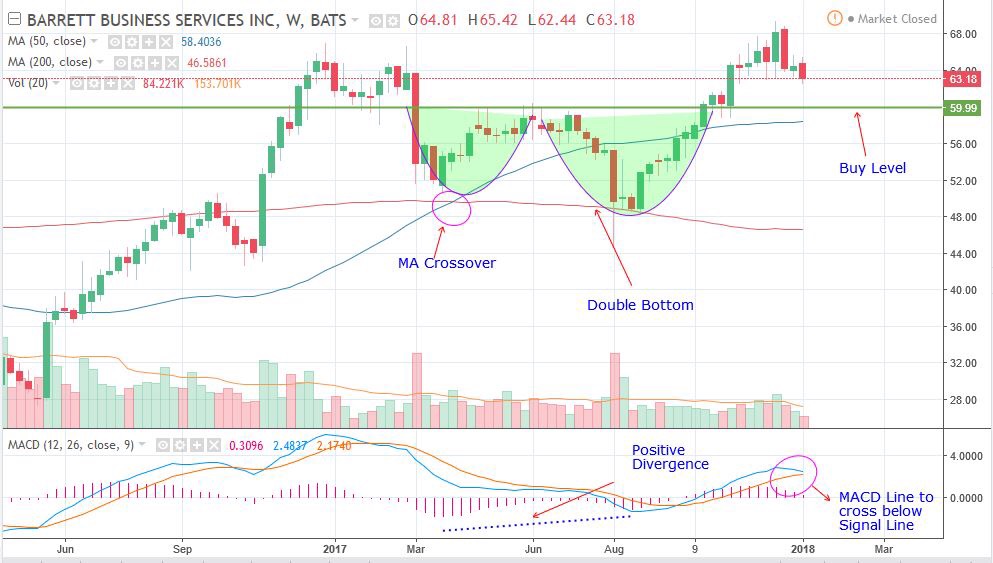 #5 Above 50 and 200 MA: The stock is currently trading above the 50-week SMA and 200-week SMA. This indicates strong bullishness.

Indications of Possible Pullback
In the short term, the stock may pull back and correct until the major support line at $60 due to following reasons:

• MACD line below the signal line as well as below zero in the daily chart.
• MACD line about to cross below the signal line in the weekly chart.
• Bearish engulfing candlestick pattern is currently being formed in weekly chart of BBSI. This pattern occurs when the body of a previous green candle is completely engulfed by the body of the red candle. If this pattern is complete, it indicates a possible down-move in near-term.

Recommended Trade (based on the charts)
Buy Price: If you want to get in on this trade, you can purchase shares of BBSI when it corrects to the buy level of $61.27 to $60. This buy level is marked in the daily chart (green rectangle).

Note: It is best to enter near $60 when the stock is near the resistance-turned-support level. You may also opt to buy half the intended quantity at the first gap-support level of $61.27 and purchase the remaining half quantity if the stock pulls back to $60.

Risks to Consider
The stock may reverse its overall trend if it breaks down with high volume from the 200-day SMA. The sell-off of the stock could also be triggered in case of any negative news, overall weakness in the market, or any regulatory changes in the sector.