Editor’s note: For this new weekly column, Rick Pendergraft shares one of his favorite stock trades for the current market. Rick has been studying, trading, analyzing and writing about the investment markets for over 30 years. He has worked for some of the largest financial publishers in the world and he has been quoted in the Wall Street Journal, USA Today, the New York Times and the Washington Post. In addition, he has been interviewed on Bloomberg, CNBC and Fox Business News. Rick’s analysis process includes fundamental, sentiment and technical analysis.

Corcept Therapeutics has doubled in price in the first 10 months in each of the last three years.

Obviously there is a cyclical pattern in Corcept’s stock price. 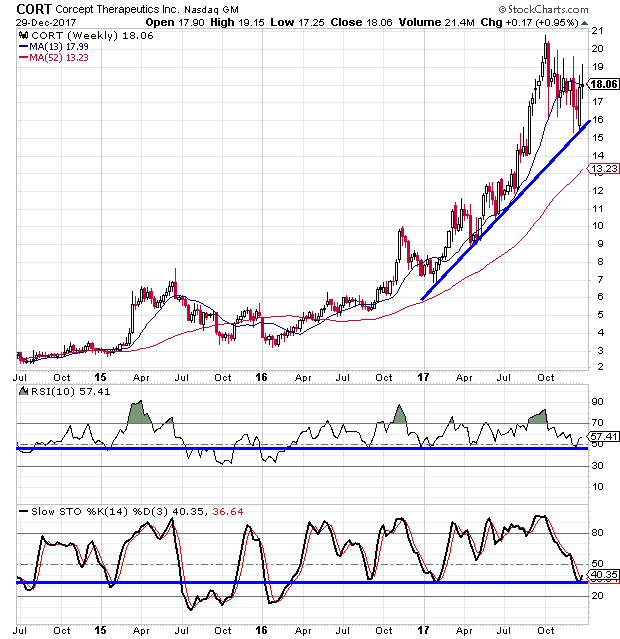 Technicals
We see on the chart that in addition to the seasonal pattern, a trendline has formed that connects the lows over the past year and the stock just recently bounced off of that trendline.

You can also see that the two oscillators have dipped down to levels that have marked reversals in the last couple of years.

[hana-code-insert name=’adsense-article’ /]Both the 10-week RSI and the weekly slow stochastic readings dipped down to the same areas they were at in the beginning of 2017.

If you aren’t familiar with the company, Corcept Therapeutics Incorporated is a pharmaceutical company that discovers, develops, and commercializes drugs for the treatment of severe metabolic, oncologic, and psychiatric disorders in the United States.

The company has several drugs on the market already and there are a number of drugs that are in various trial phases as well.

The company was founded in 1998 and is headquartered in Menlo Park, California.

Fundamentals
From a fundamental perspective, CORT has performed extremely well.

The earnings per share have grown at an annual rate of 254% over the last three years and estimates are for a growth rate in the current year of 180%.

The company’s return on equity is 60% with a profit margin of 27% and an operating margin of 28%.

Sales have grown at a rate of 75% over the last three years and analysts expect the EPS and sales growth to continue.

Sentiment
Looking at the sentiment toward CORT, there is a bit of pessimism.

The analysts’ ratings on CORT are interesting.

This leaves room for upgrades as well as additional analysts following the stock.