Editor’s note: In this new weekly column, Rick Pendergraft shares one of his favorite option trades for the current market. Each trade offers defined risk and typically targets 100%-plus potential returns. Rick has been studying, trading, analyzing and writing about the investment markets for over 30 years. He has worked for some of the largest financial publishers in the world and he has been quoted in the Wall Street Journal, USA Today, the New York Times and the Washington Post. In addition, he has been interviewed on Bloomberg, CNBC and Fox Business News. Rick’s analysis process includes fundamental, sentiment and technical analysis.

Every night for the last nine years I have run two scans, one creating a bullish list and one creating a bearish list. The scans incorporate several factors: RSI readings, volume, slow stochastic readings, etc.

When I ran the scans on Friday night, there were 24 stocks and ETFs that appeared on the bullish list.

[hana-code-insert name=’adsense-article’ /]Of those 24 bullish signals, 17 came from the utilities sector including the Utilities Select Sector SPDR.

When I pulled up a chart of the XLU, there were a couple of things that stood out to me.

The first thing I noticed was the position of the 10-day RSI and the slow stochastic readings.

They are both the lowest they have been since early July.

I was pretty sure I saw a trendline and then when I drew it, it showed the stock was sitting right on the trendline that connects the lows from July and March. 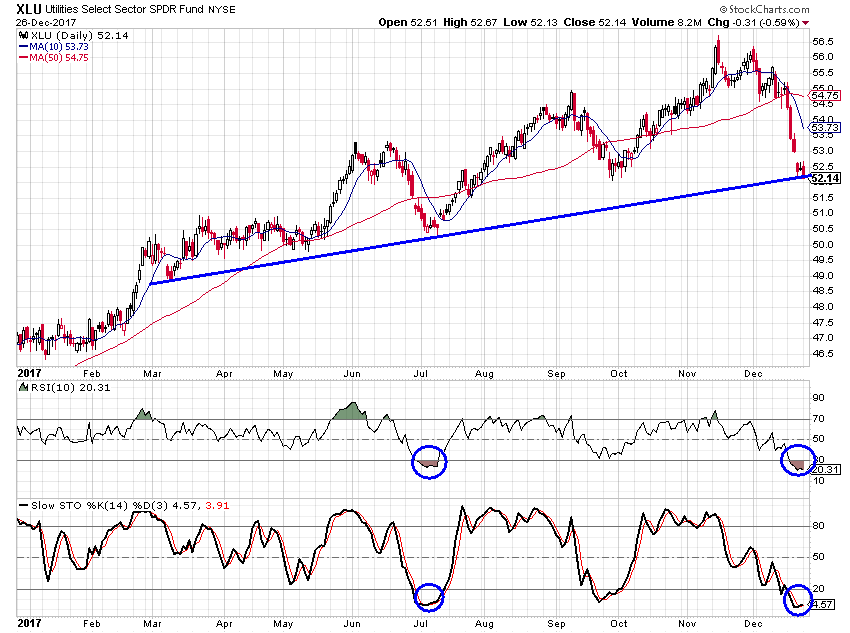 Another factor in making this suggested option play is the sentiment toward the XLU. I subscribe to a site that has a custom sentiment indicator that I am not allowed to share according to their policies, but the indicator combines a number of different indicators into one overall sentiment reading.

Looking at the overall indicator, the only two times in the past year where the sentiment has been as pessimistic as it is now were in early July and in late September. In both instances, the fund rallied for the next 6-8 weeks.

Given the similar pattern in the chart and the similar reading on the sentiment, here is the suggested option trade.

Suggested Option Trade: Buy to open, the Mar18, 50 strike calls on the XLU. These options expire on March 16, so based on the previous rallies that should be sufficient time for a similar rally to play out. Based on the current price and the percentage gains from the two previous rallies, a similar rally would take the XLU up to at least $56.20. The option closed with an ask price of $2.93 on Tuesday and you should be able to get into the trade at $3.10 or less. A rally to $56.20 would make this option worth at least $6.20, for a potential 100% return, based on the intrinsic value alone. So your target should be for the stock to reach $56.20 and I would recommend a stop-loss point at $51.50 which is just below the 52-week moving average.