Editor’s note: For this new weekly column, Rick Pendergraft shares one of his favorite stock trades for the current market. Rick has been studying, trading, analyzing and writing about the investment markets for over 30 years. He has worked for some of the largest financial publishers in the world and he has been quoted in the Wall Street Journal, USA Today, the New York Times and the Washington Post. In addition, he has been interviewed on Bloomberg, CNBC and Fox Business News. Rick’s analysis process includes fundamental, sentiment and technical analysis.

Stock Trade of the Week: Hasbro (NYSE: HAS)

It seems fitting that on the day after Christmas we would be looking at a company that makes toys and other entertaining items.

[hana-code-insert name=’adsense-article’ /]Hasbro is based in Pawtucket, Rhode Island and was established all the way back in 1923.

The company operates through two entities: The U.S. and Canada segment is one entity and the International Segment is a separate entity.

The company sells its products through wholesalers, distributors, chain stores and discount stores.

Hasbro has performed rather well in recent years. The company has seen its earnings per share grow at a rate of 18% per year over the past three years with growth of 12% expected this year. Sales have grown at a rate of 8.0% over the past three years. The company boasts a return on equity of 32%, a profit margin of 14.5% and an operating margin of 15.8%.

Despite a very respectable performance for the company, analysts aren’t very bullish toward the stock with only five of the 13 analysts following the stock rating it a “buy” or better. This leaves room for upgrades that could help move the stock higher. 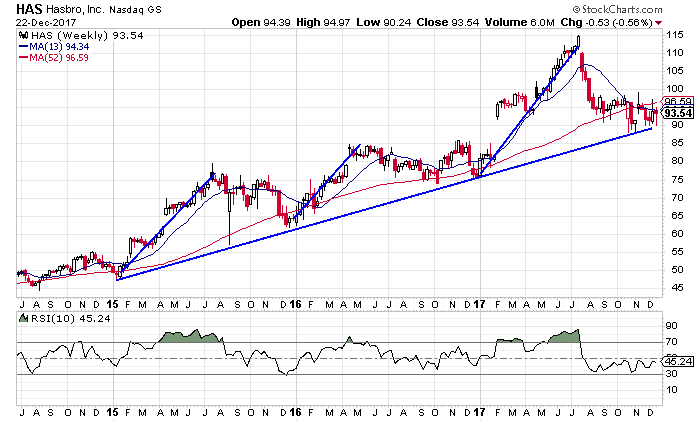 While Hasbro has performed well in recent years, the stock itself has not performed as well. It has experienced average price growth, but there is a very noticeable pattern on the chart. Almost all of the gains have come in the first half of the year. We see from January through July of 2015 the stock gained 66%. From December ’15 through April ’16 it gained 38.5% and from December ’16 through July ’17 it gained 52%. We see that the stock has formed a trendline that connects the lows that have all occurred at the end of one year or the beginning of a year. The stock is presently right above that trendline.