Please keep in mind that these “10% Trade” alerts are for information purposes only. We’re not registered financial advisors and these aren’t specific trade recommendations for you as an individual. Each of our readers have different financial situations, risk tolerance, goals, time frames, etc. The ideas we publish are simply ideas that we feel fit our specific needs and that we’re personally making in our own portfolios. You should also be aware that some of the trade details (specifically stock prices and options premiums) are certain to change from the time we make our trade to the time you’re alerted about it. So please don’t attempt to make this “10% Trade” yourself without first doing your own due diligence and research.

In short, closing the Starbucks trade early allowed me to capture 80% of the trade’s total potential income in a fraction of the time, giving me access to the cash 24 days ahead of the February 20 expiration.

I then deployed that cash into a brand new “10% Trade” with Microsoft. This new trade, which will last 24 days, is poised to generate significantly more income over the same time period than what the remainder of the Starbucks trade offered. It was a pretty compelling opportunity, so I jumped on it.

I added the details of the closed Starbucks trade to the Track Record page.

Below are the details of the new “10% Trade” I made with Microsoft. 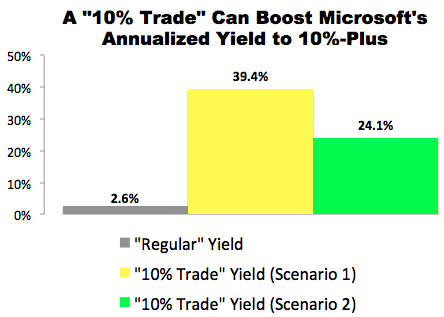 When I subtract out the commissions I’m looking at a 2.6% yield in 24 days, which works out to a 39.4% annualized yield.

In other words, this trade generates the equivalent of an entire year’s worth of Microsoft dividends in just 24 days. Talk about an income opportunity.

I won’t speculate as to whether I’ll collect the dividend income in this scenario, as shares could get called away early and disqualify me from collecting them.

In this scenario, after commissions (and not assuming any dividends), I’ll be looking at a $136.53 profit.

After subtracting out the commissions, I’m looking at a 1.6% total return in 24 days. That works out to a 24.1% annualized yield from MSFT.

Bottom Line: Either way this “10% Trade” works out offers me the opportunity to generate a 10%-plus annualized yield from Microsoft (MSFT). If I get to keep the 200 shares I just bought, compound my income, and “rinse and repeat” this process of selling calls to continue lowering my cost basis, great. Or, if I’m forced to sell MSFT for a 24.1% annualized profit, I’ll be happy with that scenario as well.

This is why I’m such a fan of “10% Trades”… and why I think anyone looking to safely boost their income in today’s volatile market should be taking advantage of them.