[hana-code-insert name=’adsense-article’ /]I admit, the timing of my last “10% Trade” with Deere & Co. (DE) couldn’t have been much worse.

By the time expiration came around in August, shares had sunk to around $84.80… so my contract expired worthless and I held onto the stock.

As I mentioned in the Track Record section (where I track the results of these trades), the plan was to hold onto shares until they rebounded before selling another round of calls to generate more income and reduce my cost basis further. In the meantime, I’d collect Deere’s steady dividend.

Interestingly, Deere went on to drop as much as 11% by early October, but it’s since rebounded back to about where I bought it. 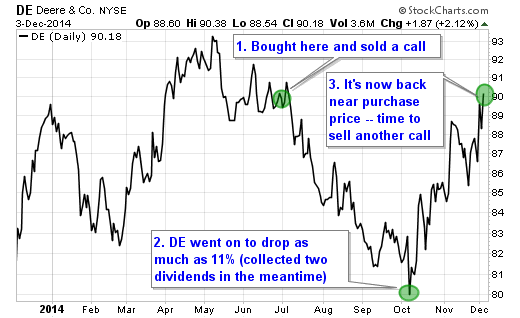 With this in mind, yesterday I sold another covered call on my 100 shares. This was the plan.

Of course, by selling a call here with a strike price of just $90 (which is $0.71 per share below my cost), I’m limiting my potential upside.  This is a legitimate concern, especially since Deere has pretty much been in an uptrend since early October and could continue to climb from here.

However, there are also a number of catalysts that point to a lower share price in the relatively near future (see here, here and here). Personally, I’d prefer to limit my risk, which is ultimately why I sold a call here.

That said, there are only two possible ways the trade I made yesterday will work out… and while only one of them offers a 10%-plus annualized yield (Scenario #1), both offer the potential to generate at least twice the stock’s “normal” annualized income.

Here’s what I mean…

When I subtract out the commissions I’m looking at a 1.6% yield in 45 days… which works out to a 13.3% annualized yield. That’s almost five times Deere’s “regular” annual dividend yield of 2.8%. I’ll take it!

In this scenario, after commissions I’ll be looking at a profit of just $69.31.

After subtracting out the commissions, I’m looking at a 0.8% total return in 45 days, which works out to a 6.2% annualized yield from Deere.

Not a true “10% Trade” but still respectable, as it’s still more than double Deere’s “regular” annual yield of 2.8%. And it’s a heck of a lot better than where I was back in early October when Deere was down roughly 11% from my purchase price.

Don’t get me wrong though, I still like Deere as a long-term holding. I just think it’s wise to heed the relatively near-term warnings the stock is facing and put my money to work in better income-generating opportunities. That’s why I’m willing to let my shares go for a smaller-than-normal profit if I have to.

Sponsored Link: Rather than sit around and hope your holdings appreciate, covered calls put you in the driver’s seat. We’ve been able to earn gains of 12.5%, 17% and 25% with this strategy so far in Maximum Income. To learn more about how covered calls can help you collect these kinds of gains each month… click here.