It’s already up 18% so far this year, roughly tripling the performance of the S&P 500 over the same period.

In fact, the stock has been in a major uptrend since breaking out of a consolidation pattern back in November 2013.

And on Friday, shares made another significant move in favor of the bulls.

This time, Wells Fargo burst through price resistance on huge volume, triggering a “BUY” signal on the MACD in the process. And with RSI still below 70, there’s still some room to run higher before the stock becomes oversold.

All of this said, if you’re looking for a very quick trade with one of Warren Buffett’s favorite holdings, then right now could be a good time to buy.

Just be mindful that shares could soon run into uptrending resistance, represented by the red line in the chart below. So get in and get out. 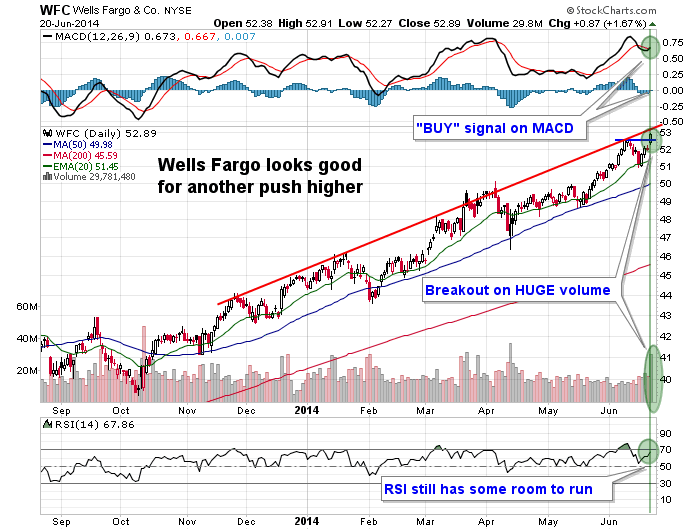 P.S. As for me? I’ll be sitting on the sidelines for this particular trade. First, I’m already long Wells Fargo (WFC) and I plan on holding for the long-haul. Second, I’ll likely be making a “10% Trade” today with Wal-Mart (WMT), Target (TGT) or Apple (AAPL). In short, I think each of these stocks have “10% Trade” opportunities that are both safer AND offer more upside than the Wells Fargo setup. I’ll let you know what I end up doing — stay tuned for the details.

P.P.S. I just had another four “10% Trades” close out over the weekend.  If you’d like to see the details, check out the Track Record page. All four trades closed as winners and generated annualized yields of 10.0% to 12.1%. As long as the market continues to offer such safe, income-generating opportunities, I’ll be happy to take them. Again, I’ll probably be making my next “10% Trade” today. Will keep you posted.

The Bulls Are Gaining Control of This Stock

Upgrades and Downgrades for Tuesday, 2/7

Down 14%, This Growth Stock is a Buy Right Now