If you’d like the opportunity to make money alongside the greatest investor in history, then right now could be a good time to trade this Buffett stock.

In short, not only do shares look cheap at current prices, but the stock is trading in an uptrending channel pattern — with clear levels of support and resistance — and it keeps going up.

Shares Are Cheap
To get a gauge on value, we like to use Chuck Carnevale’s F.A.S.T Graphs.

There’s a lot going on in the graph below, but all you really need to know is that when the black line is below the orange line — as it is now — then shares appear to be undervalued. (If you’d like more details on how this all works, there are a number of demo videos here.) 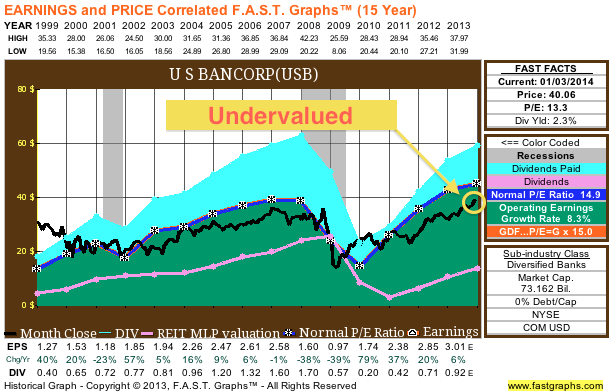 Shares are in an Uptrend
In addition to being cheap, USB’s current technical setup looks compelling.

After finally breaking out of a consolidation period that lasted from the end of June until mid-November, USB has since taken off and established an uptrending channel pattern with clear levels of support and resistance. Take a look… 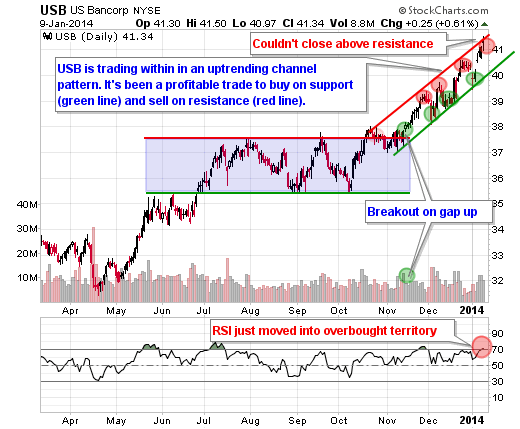 Action to Take –> U.S. Bancorp’s (USB) price action continues to play out as expected. The stock recently bounced up off the uptrending support line (green line) and is now bumping up against the uptrending resistance line (red line). A look at yesterday’s candle tells us the stock pierced resistance at some point during the day but ultimately couldn’t close above it, so our pattern is still in force.

If you got into this trade on the stock’s latest bounce off support, then now looks like an ideal time to take some quick profits. While the overall trend for USB is still up — and shares are still cheap — we’re expecting a minor pullback in the coming days if the stock is to respect its technical pattern. In addition, the stock’s RSI just moved into overbought territory, which is another good reason to take some short-term profits (if you’re trading, that is).

If haven’t yet made a move on USB, we suggest waiting for it to pull back to the green support line again before making an entry. That would relieve the RSI, keep the stock within the channel pattern, and ultimately offer a much better reward-to-risk scenario than buying now.

We’ll keep you posted on any interesting developments.

Good trading!
Trades Of The Day