If you want to make hundreds-of-percent gains in stocks (without touching options), here’s what you have to do…

That’s the starting point for 100%-plus gains.

Right now, there is only one investment that meets these criteria…

The world is as cheap as I’ve seen it in my career.

In short, major indexes in developed markets – including the U.S., Europe, and Japan – are as cheap as I can remember, based on their forward price-to-earnings (P/E) ratios.

But one sector in one country stands out the most. I’ll tell you what it is in just a minute. But as you can see in the table below, it’s valued at 50% less than the rest of the world.

This sector has been crushed over the last six years. With valuations down by 80% since 2007 (based on book value), and with forward P/E ratios of around 6 today, you won’t find a cheaper investment.

To show you how far it’s fallen, take a look at this: 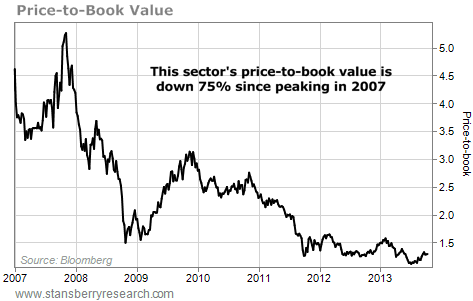 In 2007, this sector traded at over five times book value. But now it trades close to liquidation value… So by buying here, your downside risk is limited. But your upside potential is dramatic…

If this sector trades back up to two (or even three) times book value – which is not a lot to ask based on the chart – you could make two or three times your money.

Even better, the companies in this sector are in a business that isn’t going away…

So how can it be so cheap and so steady?

It must be some sort of unsavory business that nobody likes, right?

Selling asbestos cigarettes to grade-school kids or something?

It is a business that provides a service that nearly every working adult in America uses.

The business is banking.

And my recommendation is a banking fund. The top five banks make up 40% of this fund.

These are not small banks at all…

The largest bank in this investment has a stock-market value of nearly a quarter trillion dollars – making it one of the planet’s biggest companies.

The financial numbers from these banks are just extraordinary. The companies are huge. They’re dirt-cheap. And they’re making lots of money (huge returns on equity).

Chinese banks might be the world’s most hated investment.

We all know the negative stories… China is slowing. We’ve seen on TV China’s “cities” of apartments and shopping centers – with no people in them! And Chinese companies are heavily leveraged.

The country’s banking system is less developed and more fragile than most. The growth of “shadow banking” – non-traditional banking – in China creates uncertainty. Deregulation is (slowly) arriving, which will make it tougher to make those big returns on equity down the road. And this is just about banking… not about China, which has its own pile of problems.

We know the story is ugly. Our bet is that at these prices, all of that ugliness is already priced in.

Here’s how I see it: We get to buy the Citibanks and JPMorgans of China – the banks that the government won’t allow to fail – at record-low valuations. Your upside potential is tremendous. And your downside risk is small.

Is this a speculation? Yes, absolutely… We’re talking about Chinese banks! But can you control your risk here to make a good trade? Yes you can, by using a trailing stop.

I’m not suggesting investing for the next 20 years here. I’m simply sharing with you a trade on the world’s cheapest, most hated asset.

We have an easy way to play it. You can buy the Global X China Financials Fund (CHIX).

This fund has a very small market cap. In extreme circumstances, where thousands of people decide to sell or buy on the same day, it could trade a few percentage points above or below its intrinsic value (also known as net asset value, or “NAV”).

As a general rule here, do not pay more than 2% above the NAV, and do not sell at more than 2% below the NAV. You can check the NAV daily here.

This is the most hated trade I can share with you… which typically means it has the most upside potential.

By using a trailing stop, you can limit your downside risk and set yourself up for triple-digit gains.